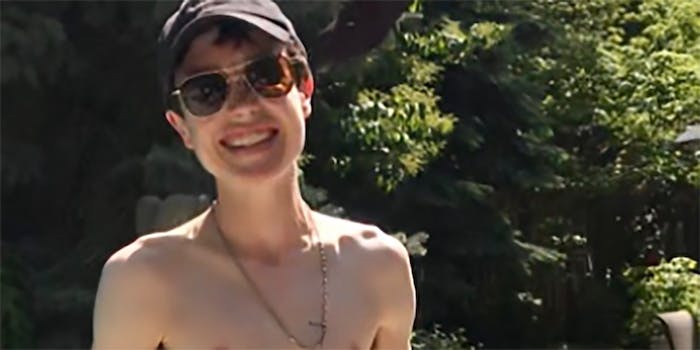 ‘My trans son looks up to you’: Elliot Page’s selfie celebrating his ‘first swim trunks’ met with overwhelming support

'I have never felt so euphoric for a person I've never met before.'

Elliot Page posted a poolside photo to Instagram and Twitter on Monday, proclaiming “Trans bb’s first swim trunks” and adding the #transjoy and #transisbeautiful hashtags, resulting in supportive responses as well as trans awareness dialogue from users on both platforms.

The photo, shared with Page’s 5.1 million Instagram followers, shows the 34-year-old actor and producer standing in a pool wearing swim trunks, sunglasses, and a baseball cap. The link was also shared to Page’s Twitter account, which has about 1.9 million followers.

On Twitter, user @beastposting enthused, “Elliot Page got top surgery AND he fucking got absolutely shredded and I have never felt so euphoric for a person I’ve never met before.”

Another posted a response that featured an image of Spongebob Squarepants character Squidward with the caption, “Oh no, he’s hot!”

That did lead a few people to speculate about top surgery even while praising Page.

“How does anyone in the US afford top surgery?” Twitter user @pepstarsworld wondered. “I’m 59 and I seriously doubt it will happen in my lifetime. Living the lie every day. I applaud anyone that can.”

Another person on Twitter, @TreeTreeB, celebrated Page for being a role model for trans people, noting, “You’re amazing! My trans son looks up to you. We always bought him trunks. Soon, he can take off the t-shirt. Thank you.”

On Instagram, @emmyraver enthused, “OMG! Yes! and LOOK AT THAT SMILE!” while @bbritneoldfordd commented, “Man, you are beaming!!”

Page, who uses he/they pronouns according to his Twitter bio, is known to entertainment fans for roles in Juno, Inception, and The Umbrella Academy, and is also helping to raise trans awareness through his public journey.

A March interview published by Time documented the first interview Page gave to a media outlet since revealing he is transgender via a letter published via Instagram. In the interview, Page stated he was feeling “true excitement and deep gratitude to have made it to this point in my life, mixed with a lot of fear and anxiety.”

The Daily Dot’s coverage of that interview noted it was “a heartfelt, joyous interview with Time magazine about his lifelong journey toward coming out and living as his authentic self and expressing support for trans children to receive the affirmation and care they need.”

“Naturally,” Daily dot writer Siobhan Ball added, “trans-exclusionary radical feminists (TERFs) are furious, tearing him down while raging about the “mutilation” of young girls caught up in the ‘trans cult.'”

More recently, Page appeared for his first on-camera interview since the December announcement — a conversation with Oprah Winfrey that first appeared on Apple TV+ on April 30.