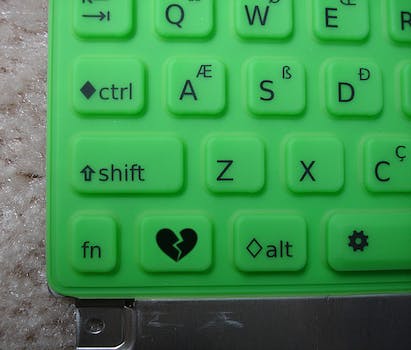 One man's journey from a young, hopeful evangelical who went "courting" on the weekends to a disillusioned serial online dater (Part I).

Yeah, I’ve done it. Who hasn’t, in this day and age. I’ve dipped my toes in the terrible raging rapids of online dating.

Sure, I’m being dramatic in saying it like that. But do others like me exist? Is there a raft of hapless daters out there, treading in their own wake, struggling to get out of the rush? And have they come to the same conclusion—are we forever drowning?

We’ve all heard of those people who’ve met The One online. Like, immediately. And right after they met they deleted their profiles and been in all the love. They do exist, these people, so perhaps I’m only speaking for myself when I say a defect exists, something innate to my being making it impossible to break out of the online dating Mobius strip.

I’ve had moments where I thought I might be free. But they were fleeting. And the longer I do this, the more I believe a disconnect lives between my expectations and my reality. This is what I discovered, after a year or so of meeting other online daters who are wonderful and attractive but somehow don’t move me, for whatever reason, and then meeting others, ones who after we’ve gone out and had drinks and laugh so much cannot see me as the man they dreamed of as a little girl.

So here I am, stuck in the empty middle space—a space inhabited by, I imagine, a host of other malcontents who also hold onto the strange belief of being meant for something great, but are never able to catch it in the stream of possibilities. That’s the middle space where dating websites thrive, the something-might-always-be-greater-space, and it’s from that place where I write these words.

Let’s go back to the beginning first, back to when I had no business looking for love—not just on the Internet, but anywhere. Let me bring you to beginning of the 21st century to a time where I lived as a non-denominational Christian. And in this time, we, the “evangelicals,” were not having sex. We also didn’t swear or drink. Though most importantly for this discussion, we did not online date. This was before the advent of Christian Mingle, EHarmony, etc.—sites that now accommodate like-minded Christian folk. Back then, though, even if my brethren and I had those means, we would have shunned them. In our view, the Internet was not for those looking to find the kind of love bestowed upon them by the Creator of the whole universe.

No, instead, we hung out in large groups with other young people and used a very specific technique called courting— one most famously advocated by Joshua Harris.  And what was this?   I’m still not wholly sure but I at least know what we did. We’d go to a public place, maybe a bowling alley or perhaps a praise and worship concert, and, if the event was rightly led, we’d “flirt” (though we did not call it that) by just barely touching our hands when reaching out toward the bowling balls, or, toward Him. Then, after, we’d all go to Perkins and eat and talk about things that did not pertain to our bodies.

Now, I don’t mean to poke fun here. This is what I, and others, really did in the hopes of meeting a significant other—nay, a wife. This courting was more a feeling than anything else, an ephemeral, implicit vibe within a context wherein you weren’t technically supposed to use your feelings. Mostly we made eyes at each other in ways that alluded to marriage. And, sometimes, it worked. People I knew in the college found this to be a successful route to marriage; it was courting, and it was very nearly a-physical. One couple, I remember, didn’t hold hands until the day they walked down the aisle.

As you can probably guess since you’re reading this, I didn’t hold quite as firm. Though I certainly would have—in fact, I would have moved to Tibet and joined a monastery had “Jenny” asked me. Jenny, The One, The One and only whom God had placed on earth for me to love and marry and who would also carry my two to three children in her womb.

I met her while working at a group home in Nebraska and I can say, even now, 10 years later and sucked dry of any belief in God, that Jenny was my first love. Though it seemed all the more important when had been predestined by the maker of everything before the existence of anything.

This love of ours mine would always be one-sided. Jenny would never have amorous feelings toward me, though she did tolerate me. We’d go on trips together and we’d golf together and she would come over to my “cottage” after the boys I was in charge of went to bed, or I’d go over to hers after her teen girl charges were asleep, but these rendezvous were miraculously innocent, so much so that they’d have made Joshua Harris proud. 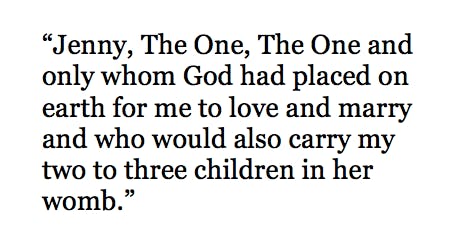 I can tell you now, good reader, I prayed more for Jenny to be my wife than I have prayed for anything else in my entire life combined. But my fantasies about Jenny and I were never to materialize. After our year contract working at the home expired, she left. I left soon after. Truthfully, I just could not stand to be in a place that only reminded me of her. I held out to hope; even after moving to Sioux Falls, where—while working at my overnight job—I dreamed of moving to be with Jenny, getting a much better job, and proving to her that I was the Godly man of her dreams.

I never did, of course. I stayed in Sioux Falls. And prayed, for about a year. I prayed that God would open Jenny’s heart and something would happen. But nothing did, and eventually I gave up. So it was really all because of Jenny that I got a MySpace page. And with that irreversible action, dear reader, our story truly begins.

This is Part I in a four-part story. Click here to read Part II.