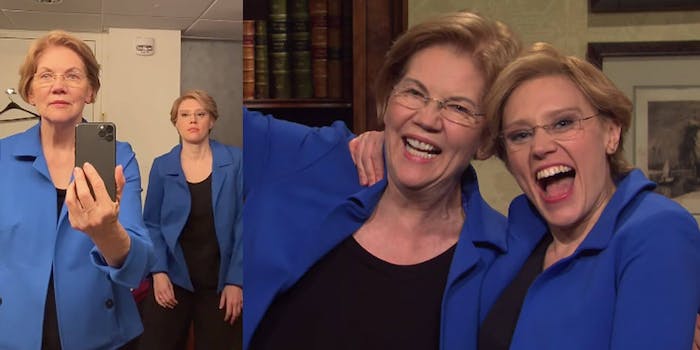 They took part in the 'I just flipped the switch' TikTok challenge.

Sen. Elizabeth Warren (D-Mass.) is out of this year’s presidential race, which means Kate McKinnon is done embodying her on Saturday Night Live—for now.

In a final send-off, Warren herself appeared on SNL alongside McKinnon to do the cold open for the show, talking about the end of her campaign. But it isn’t the moment that aired that’s capturing the internet’s attention. It’s the video the duo posted to SNL’s TikTok the same night.

A recent trend going around on TikTok has been two people filming in front of a mirror while Drake’s “Nonstop” plays. When he sings, “I just flipped the switch,” the lights go out and the people switch places, clothes, and expressions or dance moves.

SNL’s take on this saw McKinnon dancing in her phenomenally awkward McKinnon way behind Warren, both dressed in the same Warren outfit and style. The lights flicker off and back on, and Warren herself takes over the dancing.

In the 10-second video, Warren just throws professionalism out the window and goes with it, and McKinnon desperately tries not to laugh while it happens. Either way, forget the Pete Buttigieg dance, many online felt this was way more iconic.

However, some folks blasted Warren for taking the time to make an SNL appearance rather than immediately jump to endorse and campaign for a remaining candidate.

“YOU MEAN TO TELL ME I HAVE BEEN GROVELING THIS WOMAN TO ENDORSE BERNIE SANDERS TO ENSURE MY FAMILY ISN’T DEPORTED UNDER TRUMP, AND SHE HAS BEEN PRACTICING AN SNL SKIT INSTEAD OF CAMPAIGNING IN MICHIGAN!” Twitter user @jamie_agust wrote.

Yet, many of her supporters are using this as an opportunity to recover from the disappointment they felt when she suspended her campaign.

“She could have been ours for 8 years,” Twitter user @TrumpsTaxes wrote.

Hopefully, this isn’t the end of McKinnon’s Warren on SNL, but if it is, this was the perfect send-off.