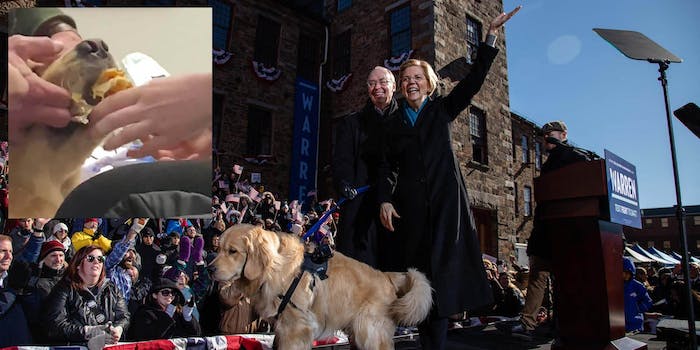 Warren’s dog steals the show by stealing a burrito

Sen. Elizabeth Warren’s (D-Mass.) dog stole the spotlight on Thursday after refusing to give up a burrito it had swiped from an unsuspecting person.

Warren, who announced her decision to drop out of the 2020 race on Thursday, was momentarily overshadowed by her golden retriever Bailey when the canine was captured clamping down on the Mexican delight.

The arguably wholesome moment was immediately a hit online, receiving hundreds of thousands of views not long after it was published.

Twitter users came to the defense of Bailey and overwhelmingly agreed that the dog deserved to keep the burrito.

Others questioned why anyone would even want the burrito back once it had been chomped on by Bailey.

“We’re you planning on eating it now I mean why make him give it back?” Twitter user @MichellBasler asked.

Some suggested that the burrito may have contained ingredients unhealthy for dogs and that the correct thing to do was take it back.

“In fairness to the humans, it probably has onions in it which are very dangerous for doggos!” Twitter user @redqueenar said.

As with anything remotely related to politics, some decided that Bailey’s actions were indicative of her owner’s policies.

“Typical of liz supporters to steal from the needy,” Twitter user @conzmoleman said.

Maybe Bailey was just hungry. But perhaps the moment was a political statement on eating the rich.

It remains unclear how the situation ended and whether or not Bailey kept the burrito. But by the looks of it, it appears the canine came out on top.