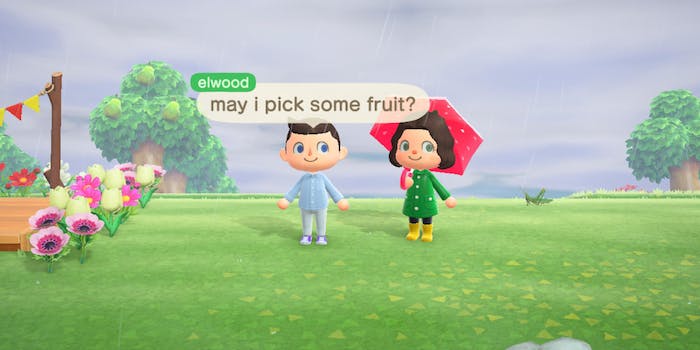 A digital refuge for many during these times is Animal Crossing: New Horizons.

The Nintendo Switch game is connecting people from all walks of life over the simplest things. For instance, a new in-game commodity, the turnip, has actor Elijah Wood visiting the islands of random players, apparently.

In the game, any non-player character can sell users turnips, which can be bought and sold in the game’s approximation of the stock market: the stalk market. Players are advertising their turnip prices online to sell their stock of turnips before they rot, which is where The Lord of the Rings star comes in.

Twitter user @directedbyrian shared her turnip prices online, which caught the actor’s eye and resulted in his visit.

“Guys I tweeted my turnip prices and Elijah Wood just came to my island and hung out,” Twitter user @directedbyrian wrote. “This is the best day in quarantine yet.”

When Wood visited their islands, his politeness won over a few more fans as he asked if he could pick some of their fruit.

“He can take the whole island!” Twitter user @ChakaLakaCharly wrote. “He’s so nice! He asked!”

Twitter user @bensforce made a bold declaration of trust after their visit with Wood in which the actor said, “long live rian johnson.”

“I knew I could trust Elijah Wood with my life,” @bensforce wrote.

Wood seemingly confirmed that he visited the islands through his Twitter activity. He has been retweeting and liking tweets about his visits. He liked one that called him “the model visitor.”

“If @elijahwood visited my island I’d probably give him a tarantula then die of happiness,” another Wood-liked tweet reads.

Maybe this means he’ll be visiting more random islands in the future.