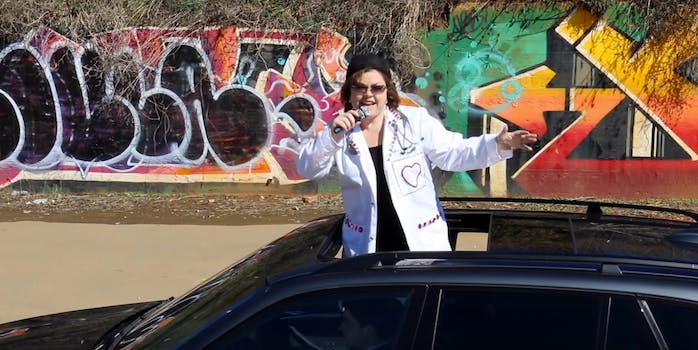 Rap Dkta D is here to educate seniors on the dangers of unprotected sex.

At this point, most people have heard that STIs are on the rise among the elderly, especially those living in nursing homes. The emergence of erectile dysfunction drugs for men and postmenopausal women having no fear of pregnancy are contributing factors, but one of the leading causes is simple lack of education. Many seniors missed out on the whole “safe-sex revolution.” Luckily, a hero has risen to help these people in their time of need. Her name is Shannon Dowler, MD or, as she’s better known, Rap Dtka D.

Dkta D might officially be the filthiest rapper of all time, putting Lil’ Kim to shame with lyrics like:

Listen up and learn for this ‘lection

If you don’t want a nasty gorn’ infection

This isn’t the good Dkta’s first foray into the rap world. Back in 2015, she released a video warning teens about the dangers of unprotected sex. Apparently, those of us between 19 and 65 are on our own.

At least this time she skipped the Rastafarian wig.

By the way, the video is set the 1989 Vanilla Ice hit ‘Ice Ice Baby’ but the credits fail to mention either Rob Van Winkle or DJ Earthquake. Now they know how Queen and David Bowie felt.