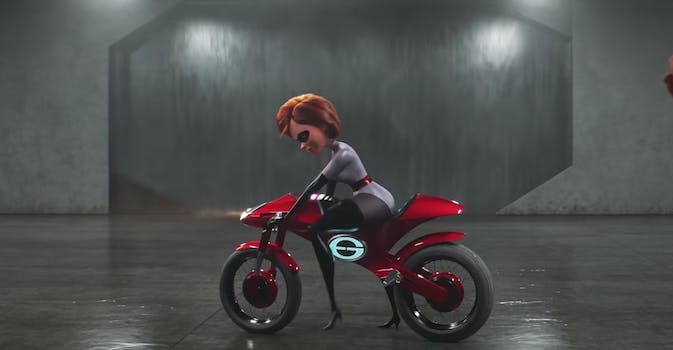 Everyone on the internet is thirsty for ‘thicc’ Elastigirl

The superhero is a super meme right now.

Going to see The Incredibles 2? You’re probably well aware that the PG-rated animated feature from Pixar is a family movie, or at least it’s meant to be. It’s the long-awaited sequel to a film that came out 14 years ago to a rash of praise from moviegoers and fans alike, and it’s considered one of the best Pixar movies.

Holy crap, WHAT is with The New Yorker's review of The Incredibles 2? Gross. pic.twitter.com/2PCVW4BQga

Lane’s review has been the subject of ire and ridicule since it went live. It’s a treasure trove of awkward statements and cringe-inducing desires. It even implies in one oft-quoted section that some men are attending showings of the flick, seeing Elastigirl, and…getting erections…? Here’s one of the juiciest tidbits that’s been making the rounds:

Take your seat at any early-evening screening of “Incredibles 2” in the coming days, listen carefully, and you may just hear a shifty sound, as of parents squirming awkwardly beside their enraptured offspring. And why, kids? Because Mommy just leaned over to Daddy and whispered, “Is it just me, or does Mrs. Incredible kind of look like Anastasia in ‘Fifty Shades of Grey?’ You know, the girl in the Red Room, with the whips and all?” And Daddy just rested his cooling soda firmly in his lap and, like Mr. Incredible, tried very hard to think of algebra. As for how Daddy will react later on, during the scene in which Helen and the husky-voiced Evelyn unwind and simply talk, woman to woman, I hate to think, but watch out for flying popcorn.

Does Anthony Lane on The Incredibles contain the single grossest paragraph in film criticism? It's a high bar!

Bizarrely, the review is littered with references to sexual innuendo, which is strange given that it’s a professional film review written about a children’s movie. It appears Lane believes that parents around the world in movie theaters will be dealing with uncomfortable sexual tension every time Elastigirl is on-screen, which is just, well…a bit strange.

The Incredibles 2 fans have dragged him relentlessly for the review, and they’re still out for blood.

Me after reading that cursed Incredibles 2 review pic.twitter.com/ouyfAO2ZPT

The best part from the New Yorker's Incredibles 2 review is the implication that men are getting such sudden and violent boners that their cocks are propelling buckets of popcorn from their laps into the air.

This weird ass New Yorker review of The Incredibles 2 sounds like the dreamlight musings of a turn of the century pervert high on opium in his pleasure den.

The review goes on to discuss Elastigirl’s suit being “as tight as a second skin” and extols her “waspish of waist” figure. He also seemed disappointed that Mr. and Mrs. Incredible fight crime in the children’s movie instead of retreating to have sex. In a kids’ movie. Rated PG. From Disney and Pixar, no less.

“I’m disappointed to report that the action in question is merely the manic pursuit of a gigantic drill that is whirring through a crowded city and demolishing everything in its path, rather than a lazy afternoon in the marital boudoir with the door discreetly shut,” he writes.

Uh, you do you, Anthony Lane.

To be fair, Lane isn’t the only one who appears to be lusting after the flick’s female protagonist, though. Everyone is thoroughly entranced with Elastigirl to some degree, it seems. Internet denizens have proclaimed the supermom “thicc” in her crime-fighting outfit, with her tiny waist and an unusually large derrière. And that’s fine, at least it’s outside the context of writing a review of a kids’ movie, right?

elastigirl has the ability to stretch her body in anyway….. that means she CHOOSING to be double cheeked up with a snatched waist…. thicc queen pic.twitter.com/gzMANHffLI

Yeah incredibles 2 was good and all but during the entire movie all I could focus on was how THICC ELASTIGIRL STILL IS pic.twitter.com/dHGc0RiQvS

It looks like everyone wants a piece of this new animated sex symbol.

do you think elastigirl uses her powers to make herself thicc pic.twitter.com/LyMPB07r5h

I forgot how slim thicc Elastigirl is.
You gotta admit she’d do NUMBERS on Instagram

People are also seriously impressed by the fact that, since Elastigirl can shape her body into any form she desired, she’s making the conscious choice every day to walk around with a voluptuous figure. Hey, who wouldn’t?

Elastigirl can make her body stretch bend and morph into any shape imaginable.

Which means everyday she wakes up and DECIDES to be thicc as fuck.

if u haven’t seen incredibles 2

you’re out of luck

because the new & improved elastigirl

is still thicc as ____ pic.twitter.com/VwxFJHxQvb

Show us the lie, though.

Pixar made Elastigirl from The Incredibles thicc, they knew what they were doing

The Incredibles 2 is in theaters now, so you can check out all the “thiccness” for yourself. We’re asking you nicely, though: Try not to be weird about it.