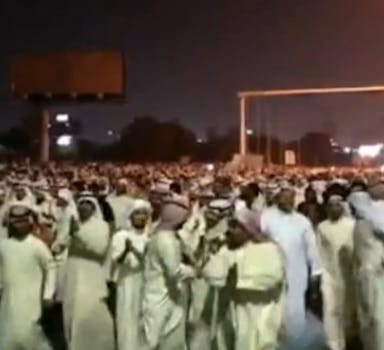 An estimated 150,000 Kuwaiti citizens took to the streets to protest changes to an electoral law.

As residents of Kuwait took to the streets to protest changes to an electoral law, Egyptians shared advice and comments on the demonstration via Twitter.

Amir Sheikh Sabah al-Ahmad al-Sabah froze parliament in June and decreed last week that citizens vote for one candidate instead of four in elections. Kuwaitis, angry that the decision was made without citizen or parliamentary input, gathered at the weekend following a call to action by the Twitter account @KarametWatan (which means “A Nation’s Dignity”). An estimated 150,000 Kuwaitis marched.

Egyptians, of course, are no strangers to mass protests against political figures, following a number of demonstrations since early 2011’s Arab Spring. According to Global Voices, they offered some words of advice. Many of the tweets were written in Arabic.

Samah Anwar gave a tip to Kuwaiti men on their attire, urging them not to wear the commonly used thobe, claiming it’s “not suitable for revolutions.” She also warned citizens to not “destroy the country,” adding that their standard of living was higher than in many other countries.

On the flip side, @MahmoudANnaJJar questioned the need for a protest: “Why would you have a revolution when the youngest child amongst you is richer than an Egyptian minister?”

Kuwaiti @Barcelonya hit back at such claims, contending that it was a protest and not a revolution along the lines of the one that toppled former Egypt president Hosni Mubarak.

According to Al Jazeera, Kuwaitis have been subjected to crowd control measures like tear gas and stun guns as authorities attempted to carry out what government opposition described as a “constitutional coup.”