More than 14 million Egyptians flooded the streets of Cairo this weekend in protest against President Mohamed Morsi.

More than 14 million Egyptians flooded the streets of Cairo this weekend in protest against President Mohamed Morsi on the one-year anniversary of his election.

These are the largest protests to grip the country since the Arab Spring uprising began in 2011 which removed President Hosni Mubarak from power and ultimately resulted in Morsi, a leader of the Muslim Brotherhood, taking his place.

“The massive protests showed that the ruling Muslim Brotherhood has not only alienated liberals and secularists by seeking to entrench Islamic rule but has also angered millions of ordinary Egyptians with economic mismanagement,” the Telegraph reported.

Late Sunday night, protesters fought back against a military helicopter flying above them using dozens of green laser pointers pointed at it. 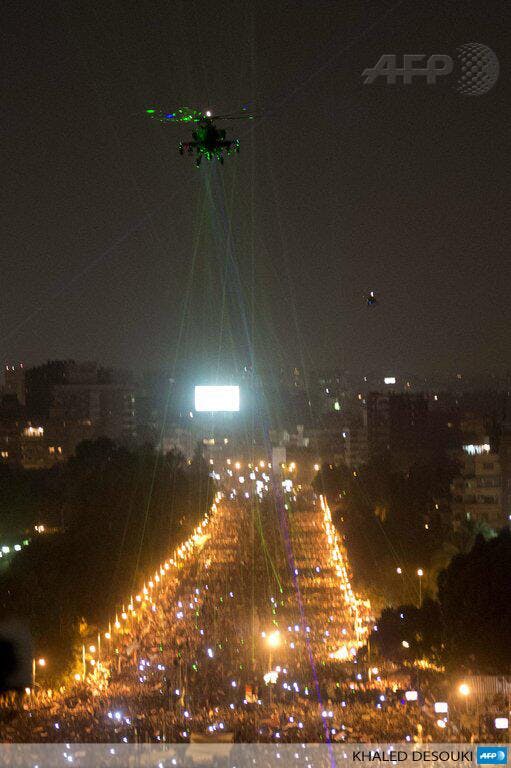 “As a helicopter pilot who’s been hit twice with high-powered lights, I can tell you that it seriously could cause a crash,” Reddit user iamkokonutz commented in a post featuring the above image. “It was still light out, around dusk, and I spotted a glint out of the corner of my eye which caused me to look towards it, just as the light focused on the helicopter. I was almost completely blinded. The direct center of my vision was lost.”

Images of the laser attack were all over Twitter, followed by words like “awesome,” “amazing,” and “intense.” Twitter user @kennybaldy tweeted a video of the laser pointers in action which was used to create the following GIF animation.