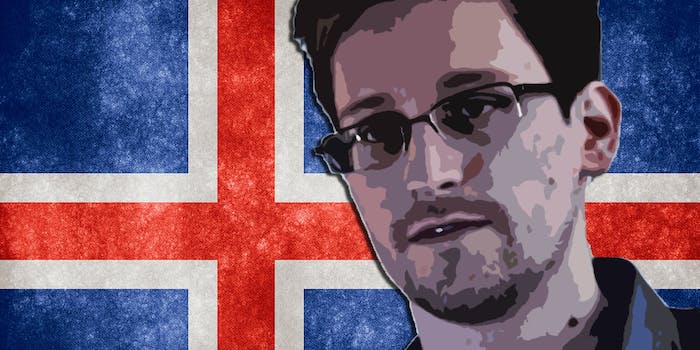 Snowden has allies in Iceland, but he'll face many challenges trying to get official protection there.

Edward Snowden, the 29-year-old systems administrator who gave up his cushy Hawaiian life to expose a massive NSA spying program, wants to seek asylum in Iceland.

His Icelandic political allies there are already trying to arrange it—assuming he can even make it there.

Snowden carved himself a place in the history books Sunday, when he made his identity public as the man who had leaked a presentation on PRISM, the FBI and NSA’s previously-unknown program to track communications that go through major American Internet companies, including Google, Facebook, and Yahoo. Though details are still unknown, it’s believed PRISM is an automated use of the legal system, allowing spy agencies to rapidly issue court orders for those companies to give up information.

A former systems analyst working for the NSA, Snowden said police showed up at his Hawaii home Thursday, before he outed himself. He’d already fled to Hong Kong. As he said in an interview with the Guardian‘s Glenn Greenwald,

The only thing I can do is sit here and hope the Hong Kong government does not deport me … My predisposition is to seek asylum in a country with shared values. The nation that most encompasses this is Iceland. They stood up for people over internet freedom.

Iceland does have a strong history of Internet freedom. It has provided asylum to outlaw torrent site the Pirate Bay, tried to crowdsource its constitution (though that fell through), and just elected three members of the Pirate Party to its parliament.

What’s likely foremost on Snowden’s mind, however, is the country’s effort to protect that other great source of leaks in this age, Wikileaks. Iceland’s Supreme Court found in April that it was illegal for a MasterCard affiliate to cut service to Wikileaks.

Birgitta Jónsdóttir, a member of the Icelandic Parliament who recently was reelected after switching her allegiance to the Pirate Party, is a longstanding supporter of Bradley Manning, a former Army private currently on trial for passing classified information to Wikleaks. In 2012, Jónsdóttir nominated Manning for a Nobel Peace Prize.

In no uncertain terms, the IMMI has offered to do all in its power to help Snowden. In a statement released Sunday, it said:

Whereas IMMI is based in Iceland, and has worked on protections of privacy, furtherance of government transparency, and the protection of whistleblowers, we feel it is our duty to offer to assist and advise Mr. Snowden to the greatest of our ability.

However, that’s no guarantee of safety. Iceland does have an extradition treaty with the U.S. The IMMI still needs “to assess the security implications of asylum, as it is possible that Iceland may not be the best location, depending on various questions regarding the legal framework.” To that end, the group plans to meet with Iceland’s ministry of the Interior to see if they can offer Snowden asylum.

In order to apply, however, Snowden would have to be physically inside Iceland.

But can he wait that long? Some have cast serious doubt on his decision to stay in Hong Kong after leaking the PRISM slides. Regina Ip, a member of the city’s Legislative Council and head of its Security Bureau, told the Wall Street Journal  “We work very closely with U.S. authorities,” and called Snowden’s choice “really being based on unfortunate ignorance.”

As noted by the New York Times, Hong Kong police likely wouldn’t arrest him unless he broke a local law or the U.S. sent a warrant. Hong Kong does have a history of extraditing alleged criminals to the U.S.