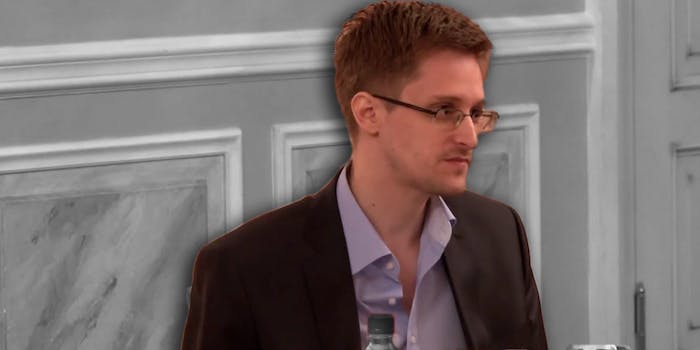 Snowden is the first beneficiary of the Journalistic Source Protection Defence Fund.

Finally, his official legal defense fund has a website.

Much of Snowden’s everyday life since he received political asylum in Russia is a mystery. Whistleblowing organization WikiLeaks gave him aid while he was stuck in political limbo in a Moscow airport, and has criticized the Guardian, which has published the majority Snowden’s leaks thus far, for not offering up aid in turn.

Two lawyers are known to have spent time with Snowden recently: Jesselyn Radack, who was part of a crew of American whistleblowers that flew to Russia to present him with an award, and the Russian Anatoly Kucherena, who was present at that award ceremony and helped Snowden gain asylum.

The JSPDF didn’t immediately respond to the Daily Dot’s request for comment about how donated funds would be used, but its efforts were verified by both Glenn Greenwald, the journalist who directly received Snowden’s leaks, and WikiLeaks itself.

The fund itself went live on Aug. 9, though with much less fanfare. Though contributions are anonymous or pseudonymous, it’s clear that some Snowden supporters are extremely generous. Fewer than 1,000 have donated, but the fund has raised nearly $40,000.

“My donation is just a small drop in the ocean compared to the price Mr. Snowden had to pay for fighting for our freedom,” wrote one anonymous user who gave $50 Tuesday morning.

“We hope that american citizens will understand, that you have done a great job against the criminal elements of the NSA and for OUR FREEDOM,” wrote another.