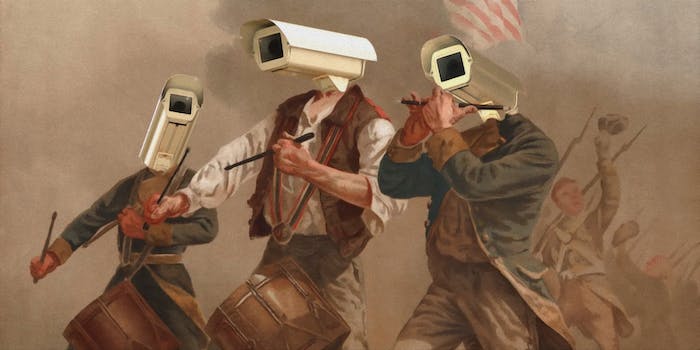 Edward Snowden and the new checks and balances of the Internet

The Internet—a community that cannot be controlled—is today's counterweight to power.

This man was once the highest ranking member of military intelligence, and his statement is exactly why intelligence officials should not have carte blanche in the name of national security.

Hayden argues that Snowden didn’t just expose what the NSA was doing, but that he fled to China and then Russia with the details of how the NSA’s signals intelligence systems work. Snowden has claimed that he will protect that information, but Hayden says he respects those countries’ intelligence systems too much to believe that these secrets have not already been compromised. Indeed, Hayden said, we have already seen foreign targets changing their protocols to avoid NSA detection. 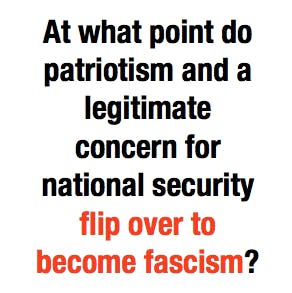 Even taking Hayden at his word, it is hard to see how revealing details about signals intelligence, i.e. passive information collection, could have led directly to the deaths of Americans or anyone else.

Sure, there’s probably a tortuous path of logic from his leak to failures of intelligence to some future attack upon Americans or allies. By that point, there would be so many intermediate moves and external factors that we’d be veering into butterflies-flapping-their-wings territory.

And by the way, about 450,000 people have top secret clearance. If Hayden thinks this betrayal was so damaging, perhaps he needs to review how the intelligence community protects such important secrets in the first place.

But the bottom line we have to ask of Hayden is: At what point do patriotism and a legitimate concern for national security flip over to become fascism?

If Hayden needs to acknowledge that spying on U.S. citizens is at the least very problematic, if not unconstitutional, then let’s not romanticize Snowden either.

Snowden hasn’t said too much publicly, but actions speak louder than words.

China and Russia are manifestly poor bedfellows for an idealist who believes in the importance of absolute transparency. His desire to support liberalism would be a lot more believable if he had fled to Denmark. Or Belgium, Sweden, England, or half a dozen other places. 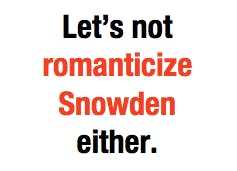 If Snowden’s motivation truly was, “I can’t allow the U.S. government to destroy privacy and basic liberties,” as the cover of the Guardian would have us believe, then he should have stayed in the U.S., and allowed himself to be arrested, if that’s what it came to.

After releasing the Pentagon Papers, Daniel Ellsberg stayed in the U.S. and after evading arrest for three days, surrendered to authorities. He was accused of treason—and eventually acquitted.

“Snowden’s contribution to the noble cause of restoring the First, Fourth and Fifth amendments to the Constitution is in his documents. It depends in no way on his reputation or estimates of his character or motives—still less, on his presence in a courtroom arguing the current charges, or his living the rest of his life in prison. Nothing worthwhile would be served, in my opinion, by Snowden voluntarily surrendering to U.S. authorities given the current state of the law.”

I don’t deny that it’s a different country today, but I disagree with Ellsberg.

First of all, how, precisely, is the cause of the Bill of Rights furthered by revealing NSA methods to China and Russia—whether that was done intentionally or simply through extreme naiveté? 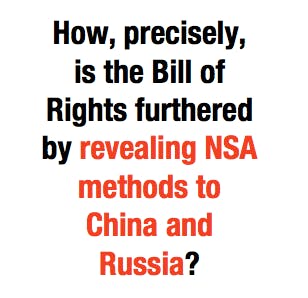 Second, whether Ellsberg likes it or not, while it may not be ideal, in the real world, Snowden’s contribution to privacy and liberty absolutely depends on his reputation, character, and motives. That was as true in 1971 as it is today. Rosa Parks, who refused to give up her seat on the bus in 1955 to a white man, was hardly the first black woman to do so. But she became the symbol of the movement because of her unimpeachable character.

Finally, there is a process, believe it or not, for maintaining the integrity of the Bill of Rights. It’s called judicial review, and it requires that Snowden be in the U.S. Remember all that “checks and balances” stuff in 5th-grade civics class? That would be one of them.

Oh, and last but not least, comparisons to Bradley Manning are false. He is a member of the military and therefore he is subject to the military code of justice—a different set of laws.

The Internet encourages freedom of thought and argument—things that might lead someone to release information about an officially sanctioned program that he or she believes is wrong. Unfortunately, it can also sometimes lead to an ability to argue every side of the issue until we’ve reached a level of relativism unmoored from reality. Such an environment can make you think that the laws and practices of the United States can be equated with those of Russia or China. 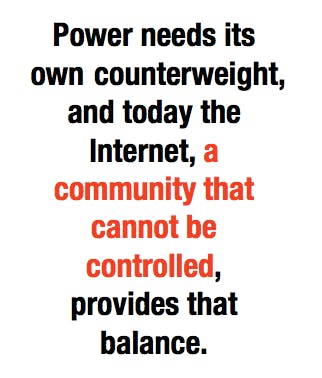 The Internet bestows individuals with new powers of education, investigation, and expression—an ability for any of us to challenge those in power—and it encourages idealism, which sometimes veers into extremism.

It also tends to support public transparency and private obscurity, perhaps leading whistleblowers to feel more inclined to hide than face the consequences of their actions.

These tendencies can all be good or bad. Whichever they are, I can’t help but feel that they are absolutely necessary in the world today. Power creates risk and necessitates expediency. The NSA program survived both Bush and Obama, two presidents who could not be more different from each other. In itself, that doesn’t mean the program is a good or bad thing, or that all people in power behave in entirely the same way. But to some extent, power has its own logic, its own needs, and tends to push those who wield it in a consistent direction.

Power needs its own counterweight, and today the Internet, a community that cannot be controlled, provides that balance.

The world has changed since 1776, but if our ideals have a chance of surviving another generation, then that’s due to a community and a technology that the American founding fathers could never have dreamed of.