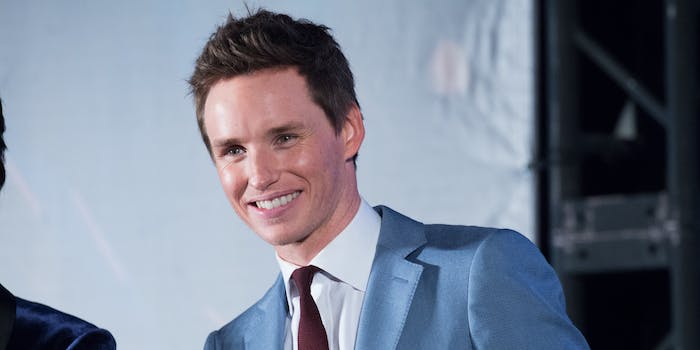 After speaking out against J.K. Rowling‘s transphobic statements earlier this year, Fantastic Beasts actor Eddie Redmayne now says the backlash against the author has been “absolutely disgusting.” This comment is controversial in itself, given the enormous power imbalance between Rowling (a billionaire with 14 million Twitter followers) and the people who may be harmed by her public opposition of trans rights. In the U.K., trans people (and cis allies who support trans rights) are seldom offered a platform by mainstream media outlets, while transphobic commentators are regularly published in major newspapers.

Redmayne’s new comments appeared in a Daily Mail interview promoting the upcoming movie The Trial of the Chicago 7. He said he reached out privately to Rowling to express sympathy due to the “absolutely disgusting” “vitriol” she was receiving on social media. He also added, “Similarly, there continues to be a hideous torrent of abuse towards trans people online and out in the world that is devastating.”

These brief quotes went viral on Twitter after they were reposted by LGBTQ Nation, prompting people to point out that Redmayne profited from playing a trans woman in The Danish Girl. This casting choice was recently used as a key example of transphobic filmmaking in the Netflix documentary Disclosure: Trans Lives On Screen, highlighting the idea that when cis men play trans women, it perpetuates the belief that trans women and men are interchangeable. In the documentary, writer/actress Jen Richards characterizes this as a direct cause of transphobic violence.

Redmayne’s interview also inspired some people to take a look at the timeline of his statements on this topic, pointing out that his support for Rowling directly overlaps with the filming of a new Fantastic Beasts movie. Rowling is essentially his boss (or one of them) as long as he continues to star in the franchise.

His comments portray the issue as a problem with social media toxicity across the board, expressing sympathy for trans people and for J.K. Rowling. But the two sides of this conflict are not on equal footing.

Rowling definitely has received some ugly comments on social media, but she’s also a billionaire who is protected by celebrity connections and a team of lawyers. By sharing elements of transphobic propaganda online, Rowling made herself a figurehead for the concept of transphobia in general. She’s an icon to British trans-exclusionary feminists, and she’s a clear target for people who are angered and frustrated by the rise of transphobia in public discourse.

There’s a big difference between this and the experiences of an average trans person who faces harassment online or in real life, simply for existing. And by using words like “vitriol” to describe Rowling’s experience—especially in a right-wing tabloid like the Daily Mail—Redmayne plays into the transphobic talking point that cisgender women are somehow victimized by trans people campaigning for basic human rights.