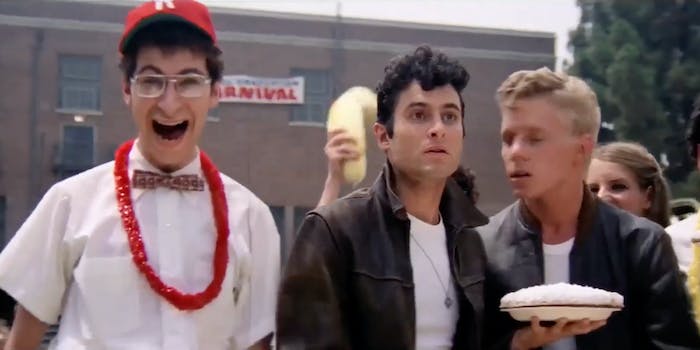 The server called him out for being a creep.

Eddie Deezen is best known for playing the gullible nerd Eugene in the Grease movies and has made a career of playing similar characters in both live-action (e.g. War Games, Revenge of the Nerds) and animation (Dexter’s Laboratory). But he’s now been banned from several restaurants in Cumberland, Maryland after he complained on Facebook about a server not wearing makeup.

Recently, on his public Facebook page, where he posts multiple times a day—sometimes multiple times hourly—Deezen wrote about his experience with a server at a restaurant he visited regularly and asked his Facebook friends for their opinion on whether he’s sexist and if his objectifying of a server over her fake eyelashes was “really so awful.” Now that he will no longer patronize the restaurant where she works, he also wants to know if he should write her a letter explaining himself.

According to Deezen, he would come in weekly, tip her $20, and leave a note that told her she was beautiful. But when the server stopped wearing false eyelashes, he noticed that the server wore fake eyelashes again after he mentioned that he liked them, noting that “She was 100% aware that I loved looking at her in the false eyelashes and she always would wear them.”

To Deezen, his view of the server wasn’t any different than if a woman encountered a male server who looked like Brad Pitt, George Clooney, or Ryan Gosling and one day looked unkempt. He also believes that women only spend money on and wear makeup for men, isn’t sure why she doesn’t wear fake eyelashes all the time, and he wonders “what happened to ruin the nice weekly lunch I would enjoy.”

“I do believe we are spirits and I do not like to objectify people,” he wrote. “That said, I think there is a time and place for everything and I believe that every once I [sic] while, men or women can just look at a member of the opposite sex and as a sexual being.”

Deezen’s post has since been deleted, but Kara Lashbaugh, who identified herself as the server in question, painted a much different picture. She posted screenshots of Deezen’s post on Twitter and called him a creep who inquired after her schedule. She said that Deezen would refuse to eat there unless she wore makeup.

“Eddie Deezen is a fucking CREEP who comes into my work at least once a week, calls and asks other servers for my schedule, and if he comes in and i’m not wearing makeup HE LEAVES,” she wrote. “And this grown ass old man has the balls to post this on facebook about me im losing my mind.”

If you look at Deezen’s post in a different light, it’s not a tale of a regular whose usual server suddenly stopped being nice to him. It’s far more familiar to women and those in the restaurant industry alike. It’s a story about a customer objectifying his server and basing her monetary worth on that factor. It’s a story about a customer who made efforts to visit a restaurant at the same time that a server worked that a particular server worked (and called ahead to check her schedule). It’s also a story about a man who had such strong opinions about a server’s appearance that he felt entitled to tell her about his preferences to his face. And Deezen felt so distraught about the incident that was created entirely by his own volition he posted about it in all-caps and with all sincerity on Facebook. There’s an uneven power dynamic involved not just because Deezen is a customer, it’s also because he’s a celebrity who’s using his Facebook page with far more reach to complain about a server who lives in his town.

Lashbaugh’s tweets quickly went viral as people became disgusted by Deezen’s post, and another woman responded to Lashbaugh and said that Deezen acted similarly toward her. But in Facebook comments, which were posted to Twitter as well, some women came out to defend and call out Lashbaugh.

Soon enough, Deezen was banned from a local restaurant.

“I have read, reviewed and took a couple of hours to think on this,” Rachel Crawford, the daughter of the restaurant’s owner, wrote. “I am here to inform you that your business is no longer welcome at the Crabby Pig. Our servers are not there to fulfill your sexual fetishes. Our jobs are to solely serve food and make sure we give great service.”

Deezen eventually admitted he was wrong for sexually objectifying Lashbaugh and requiring her to wear fake eyelashes, noting that he tried to go to her restaurant to apologize in person. But he also attacked Lashbaugh in several Facebook posts in response to the story going viral and claimed that he is being bullied by “her cronies” and that she’s spreading rumors about him. He believes that they only want their 15 minutes of fame.

“These people are harassing me, trying to intimidate me like bullies,” Deezen wrote. “Bullies are always cowards. Yes, if the shoe fits.”

He called Lashbaugh sexist slurs, described her as a “small-time, small town lonely girl who is desperately craving attention,” and threatened to reveal her full name on Facebook if the harassment continues after posting her initials. He also said he planned to go to the police to obtain a restraining order and highlighted his celebrity and experience in Hollywood as a reason why people should trust him.

In a subsequent post, Deezen claimed that the people who’ve sent him “very mean, nasty PM’s” are homophobic, claimed that the server was rude to his brother (who is gay) whenever she served them, and added that “I have no doubts these rednecks are racist too.”

“Now I am getting banned in a few local restaurants,” Deezen wrote in an update. “Fine. Let these racist homophobes eat their food themselves. Haters gonna hate.”

Lashbaugh told TMZ that while she’s yet to file a police report against Deezen, she’s “planning to meet with a lawyer to see what she should do going forward.” But on Twitter, Lashbaugh pointed to the backlash and harassment she’s facing for calling out Deezen as a reason why so many women don’t report being harassed.

“I told the truth about something that happened to me and now the entire tri state area is either making memes about it or sending me hate messages so that’s cool lol there’s a reason so many things go unreported i’m literally sick,” Lashbaugh responded.