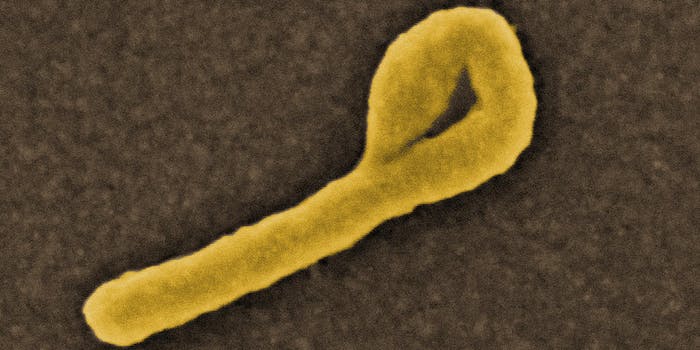 You can’t cure Ebola with stupidity

After decades of close calls and brush fires, the viral disease Ebola—with its only occasional yet easily dramatized symptoms of profuse bodily hemorrhaging—is poised to make its grand debut on the world stage in the most horrific of ways, torching a path through the spine of West Africa.

While there’s little to no chance of Ebola (officially classified as “Ebola Virus Disease”) emerging stateside, its burgeoning death toll is a health crisis in the making, the massive countrywide quarantines currently unable to slow down its progression. Research teams all across the world are offering their experimental treatments and vaccines for use, while the United States pledged to send over 3,000 military personnel to the ground effort earlier this month. Also this month, a research team published a paper in the academic journal Eurosurveillance in which they posited a worst-case hypothetical scenario of 74,181 to 277,124 new cases of Ebola by year’s end.

Have no fear though, frightened citizen. It turns out that all our worrying is for naught—the cure has been staring us right in the face all this time: Magic Water!

At least, that’s according to Homeopathy Plus, an advocacy group/website based out of Australia. Last Thursday, the owner of Homeopathy Plus, Fran Sheffield, created a Change.org petition to make that very case to major health organizations:

End the suffering of the Ebola crisis. Test and distribute homeopathy as quickly as possible to contain the outbreaks. Homeopathy has a proven track record of treating and preventing serious epidemic diseases. It’s used by governments for dengue fever, leptospirosis, epidemic fever, malaria, and Japanese encephalitis epidemics, and, historically, for other serious contagious diseases.

For those not in the know, homeopathy is a philosophy of alternative medicine that states all illness can be treated by identifying the symptoms of a sufferer and offering them a diluted solution of a substance known to cause those exact same symptoms in larger doses.  According to homeopathic theory, this works because through the process of dilution, the memory of the substance is retained, but not its harmful physical presence. According to physics, this doesn’t work because water is not a taped over videocassette.

While there are many, many objections you could make about the viability of homeopathy, my personal favorite is the fact that a homeopathic remedy—if done “correctly”—contains exactly zero molecules of the original substance used to prepare it. It is literally just water, usually dropped onto a sugar pill.

In that light, Sheffield’s petition reflects a level of willful ignorance on the magnitude of flat-earthism, but in fact, she’s only the latest to come waddling out of the woodwork in the wake of the Ebola epidemic. Last March, right as the outbreak emerged, self-noted health guru Joette Calabrese penned the article “Bioterrorism and Epidemics: Knowing Homeopathy Can Help Make The World a Less Scary Place” on her blog, in which she sagely prescribed, “As a preventative if an outbreak happens nearby, Crotalus horridus 30C, one dose daily, until the threat is out of the area, is the method many homeopaths familiar with this disease suggest.”

Given that there have been a total number of 2,462 cases of Ebola prior to 2014, according to virologist and blogger Ian Mackay, and that these cases have been scattered across several decades and isolated African villages, the chances that any homeopath would be familiar with the disease are as infinitesimal as the amount of medicine in one of their doses.

More recently, the popular and conspiracy-laden alt-med site Natural News hosted a blog entry in August from Norwegian homeopath Ken Oftedal; with nary a self-conscious thought, Oftedal recommended obtaining a sample of Ebola (spit or blood) and filtering it repeatedly through two water bottles before drinking it up as a preventative antidote.

Even that proved too much for the homeopath community, as the website soon took down the post, matter-of-factly reminding its readers that they do not condone interacting with a very hazardous biological threat. So pervasive, if fringe, is the idea that homeopathy can treat Ebola, that the World Health Organization (WHO) took to Twitter to expressly denounce the idea.

While it’s easy enough to dismiss Oftedal and others’ advice as irrelevant (and, considering how unlikely they would ever need to heed it, cowardly), there are homeopathic organizations currently nestled in Africa and other developing countries. In Tanzania, one such organization, on its website, claims its mission as “presenting free holistic treatment for people living with HIV/AIDS.”

And as inaccurate as Fran Sheffield might be about most any subject matter, she incredibly isn’t wrong about the fact that governments have and still do sponsor and endorse homeopathy. In India in 2012, citizens were offered free homeopathic treatment for dengue fever, while even the U.S. and the U.K. has allocated research funding to investigate its merits (Spoilers: there weren’t any).

In 2009, the World Health Organization explicitly condemned the use of homeopathy for conditions like HIV, malaria, and tuberculosis; uncoincidentally, these diseases wreak their most havoc in rural, developing areas with a poor healthcare infrastructure.

The biggest reason why these countries and their inhabitants turn to homeopathy is because they are unable to access adequate and affordable health care otherwise. Coupled with a (many would say justified) mistrust of Western intervention and an incomplete knowledge of medicine and it’s not so difficult to understand why someone might go for cheaper alternative treatments. That’s a bleak reality that has already played out, with reports of Ebola-stricken villages turning away health care workers and hiding their sick relatives under the mistaken fear the workers will further spread the plague.

I have decidedly less sympathy for the placebo peddlers that comprise the homeopathic community, tucked safe under the same blanket of denial they’ve worn for two hundred years, when Samuel Hahnemann founded the theory of homeopathy. As modern medicine has grown and evolved over these past two centuries, homeopathy has stagnated.

And yet it persists. Fran Sheffield’s petition as of today has surpassed over 1,000 signatures, and on Facebook, her Homeopathy Plus page currently has over 21,000 likes. As silly as you might be tempted to find someone recommending homeopathy for Ebola, is it any sillier, or sadder, than finding our own pharmacies stocked with the latest in homeopathic cure-alls?