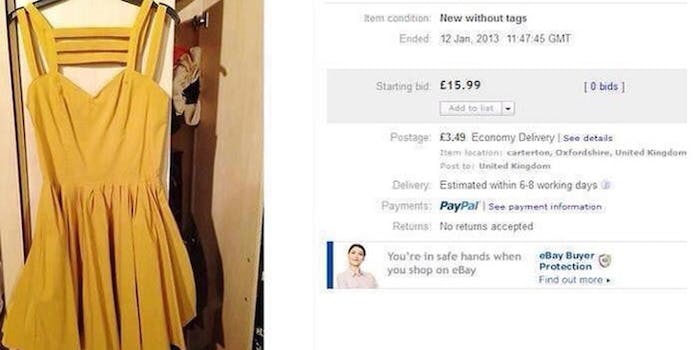 Well, that's one way to raise the asking price (and a few eyebrows).

An unnamed eBay seller from Oxfordshire has attracted bids well over £150,000 for her yellow ASOS skater dress after accidentally uploading a nude photo of herself to the auction site.

The initial asking price was just £15.99, but numbers started to climb rapidly after word got out that the woman’s half-naked body appears in one of the photos ostensibly showing off the dress.

And sure enough, the clueless auctioneer’s bottomless figure can clearly be seen in the reflection of a mirror just behind the clothing.

The Twitter hashtag #ebayyellowskaterdresssoon began to trend in the UK, leading some to call shenanigans on the whole thing.

“Possibly the best use of viral advertising to date?” one user asked.

That’s entirely possible, but the girl at least appears to be real: She updated the item’s page with a new photo of herself, covered this time, and added the tagline “#ebayyellowskaterdress as seen by thousands. never worn naked.”