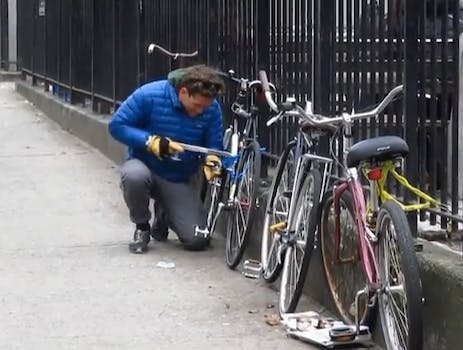 eBay could drastically reduce bike theft with this simple policy

As any urban cyclist will tell you, bike thieves are bad, bad people, on par with puppy-kickers and those who want to make the elderly cry.

As any urban cyclist will tell you, bike thieves are bad, bad people, on par with puppy-kickers and those who want to make the elderly cry.

But a groups of Brits with an online petition at Change.org might have found a way to help shut them down. Each bike has a unique frame number, like a car’s VIN, they’ve noted. So why doesn’t eBay make those mandatory for used bike sales?

“It has always annoyed me that it is so easy to sell stolen bikes quickly and for a decent amount of money. Being a member of cycling forums I hear about expensive bikes being stolen every week,” wrote Richard Biggs, who started the petition. “That’s why I’ve started this petition calling on eBay and its subsidiaries to make frame numbers mandatory on listings on its site.”

An eBay representative told the Daily Dot that the company that “we keep our policies under continuous review,” and indicated that the biggest reason why they don’t have such a policy is because they haven’t really considered it yet.

While the spokesperson said that “eBay is not aware of any global or U.K. initiative to track frame numbers,” the petition, which has almost 1,500 signatures since its start in late January, notes that several such databases already exist online.

And while the representative noted that eBay “believes any such policy would be best implemented industry-wide,” most major brands, including Trek, Schwinn, and Raleigh, already put unique serial numbers on their bikes.

“eBay goes to considerable effort to protect the intellectual property of music and film companies, removes auctions for designer items it suspects are illegal copies, and requires motorists to enter a registration number when listing a car for sale,” Biggs wrote.

“These are steps in the right direction, but cyclists of Britain would like the same consideration given to our bikes.”