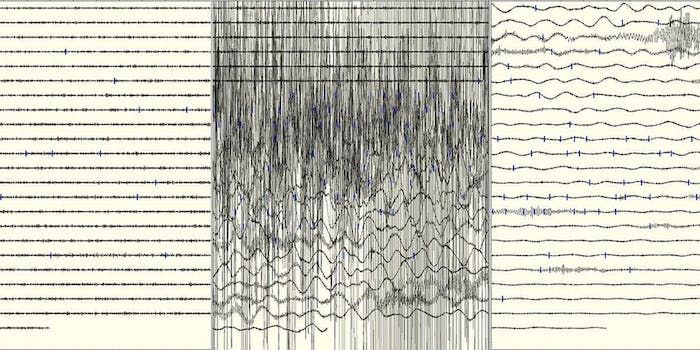 Could earthquake prediction tech save California from the ‘Big One’?

These advancements could save lives.

This weekend, San Francisco was hit by a 6.0 magnitude earthquake, leveling buildings and injuring 172 Bay Area residents. While most of the Internet yukked it up over images of wine stocks spilled on Napa floors, much of the Bay Area breathed a sigh of relief: They’d been spared the big one, again. Unbeknownst to many Bay Area residents, however, researchers at locales like the University of California, Berkeley are experimenting with that would provide an early warning system for the next major earthquake. In this case, the technology worked, sounding an alarm just seconds before the North Bay quake.

But why didn’t some civilians didn’t know about it? And should scientists keep tweaking the technology, or is it time to release it—in the interest of the common good?

ShakeAlert, as it’s called, is a partnership between Cal, the University of Washington, CalTech, the Southern California Earthquake Center, Eidgenossische Technische Hochschule Zurich, and the United States Geological Survey. Here’s how it works:

The objective of earthquake early warning is to rapidly detect the initiation of an earthquake, estimate the level of ground shaking to be expected, and issue a warning before significant ground shaking starts. This can be done by detecting the first energy to radiate from an earthquake, the P-wave energy, which rarely causes damage. Using P-wave information, we first estimate the location and the magnitude of the earthquake. Then, the anticipated ground shaking across the region to be affected is estimated and a warning is provided to local populations. The method can provide warning before the S-wave, which brings the strong shaking that usually causes most of the damage, arrives.

The mechanics are fascinating, and well-established, with a great deal of science to back them up along with experimental data demonstrating a high accuracy rate. Similar systems are already in use in Mexico and Japan, where they’ve provided early warning for quakes. Yet, it’s facing an $80 million funding shortfall—despite a state mandate to create an early-warning system and private funding supporting the research.

Early warning systems are, public safety officials warn, critical. They can provide time to isolate utilities and other sensitive equipment to limit damage, and they can alert motorists to allow them to move to safety. Such warnings can also provide advance notice for hospitals, first responders, and workers who need to kick into gear after a quake, and they can get civilians to safety before severe shaking starts. They’ll save lives and property, two issues that many Californians are thinking about in the wake of one of the largest quakes in recent years, a reminder that one of the state’s most crucial economic and social areas is situated right on top of a fault.

Currently, only private firms offer early warning systems, and these are primarily geared towards industry, not public works and individual consumers. If you want an early warning system to turn off valves in an oil refinery, for example, you can find the equipment to do it—if you can afford the materials, installation costs, and ongoing maintenance.

Testing of such systems uses real-time tracking of seismic events, paired with predictions, to determine accuracy, increase lead time on warnings, and estimate error rates. But experimental data still aren’t made public, even if such information could provide a public safety benefit.

“The public dissemination of earthquake early warning alerts is not part of the current project,” the California Integrated Seismic Network notes. “There are two main reasons for this. The first is that there are many areas in California where there are not enough seismic stations to recognize and characterize a newly starting earthquake so quickly that an early warning would be possible. The second reason is that for early warning alerts to be useful, people, companies and institutions must know beforehand what they will do when they receive the information. This is an outreach effort that has not yet been part of the project due to the limited funding currently available.”

Will California, or another U.S. state, have to wait for a major quake before the necessary funding is pushed through? This may be exactly what happens, as California is struggling to fund ShakeAlert and the necessary equipment, seismic observation stations, and personnel to make the system work with a high degree of accuracy. This leaves seismologists and officials in a rather awkward quandary.

They could release the rudimentary system anyway, stressing that it is incomplete, not quite ready for launch, and potentially unreliable, but better than nothing. The launch would have to be accompanied with warnings that citizens shouldn’t get too complacent, because the advance notice provided likely wouldn’t be very extensive, and false alarms could occur. Citizens would need to back up ShakeAlert or a similar system with earthquake preparations as already recommended by the state and other agencies.

Or, they could keep the technology under wraps as it remains under development, focusing on making it as good as possible before it’s released. In the meantime, earthquakes could cause millions or billions worth of damage accompanied by severe injuries and loss of life that could have been prevented had such a system been implemented, leaving officials in an unenviable position. No scientist or official wants to be the person wondering whether an early warning system could have saved lives—but politicians don’t appear to be bound by the same concerns, as they continue to remain unsure about the merits of funding early warning research.

It took years for tsunami warning systems to get up and running, and those years were filled with catastrophic events that could have been predicted. Could California end up paying a very high price to convince the state, and the nation, that funding early warning systems is worth it and should become a funding priority for the government? The thought that it could take a huge seismic event to trigger commitment to such technology is terrifying, as even a few seconds of warning could make the difference between life and death for residents of seismically-active areas.

The thought of losing a few bottles of wine might not seem significant to people outside the state, and even some in it, who don’t understand the implications of a massive economic blow to the wine industry. But fallen wine barrels could be peanuts compared to the potential damage associated with an even bigger quake. The pictures the news wasn’t as fond of in Napa included houses collapsing in on themselves, fallen chimneys, cars pancaked by debris, and kitchens thrown into utter chaos thanks to supplies and crockery thrown everywhere by the shaking.

Those images are just a tiny sliver of California’s possible future, the consequence of living on fractured and restless ground. In the face of that knowledge, how can the state defend a refusal to fund life-saving technology?