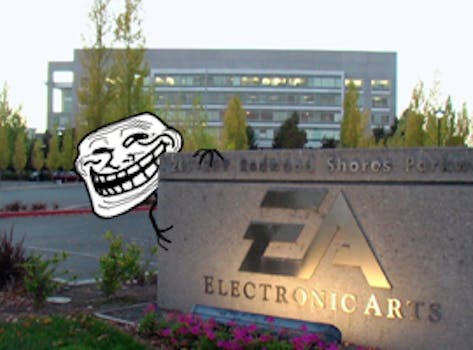 Although EA's CEO probably wishes he had written a hilarious response to winning Worst Company in America, it was actually a joke by Dorkly's Andrew

If you find it hard to believe that the head of one of the largest game development companies in the world would come out and label his critics as “a bunch of nerds angry about the ending of Mass Effect 3,” there’s a reason: He didn’t actually say it.

But that is what Andrew Bridgman, editor of the gaming humor site Dorkly, wishes Electronic Arts COO Peter Moore would have said yesterday, after EA was named “Worst Company in America” for a second year in row by the Consumerist blog.

“It would have been funny to just see a company come out and drop the pleasant, professional demeanor and just call the bullsh*t,” Bridgman said.

So that’s exactly what Bridgman decided to do for EA. After it was announced Tuesday that EA once again “won” Consumerist’s March Madness-style poll to determine the least popular brand in the country, beating out Bank of America by a whopping 78 percent in the final vote, Bridgman decided to deliver his own response. Written as an EA press release, the Dorkly editor’s missive took gamers to task for having massively misplaced priorities.

“I’m not a fan of EA and I’m not defending them, but it’s pretty ridiculous to say that they’re the worst company,” Bridgman told The Daily Dot. “There’s a pretty huge gap between EA and Bank of America. EA isn’t being sued for billions of dollars over foreclosures.”

EA’s actual, much more restrained response was posted on the company’s website Tuesday.

Bridgman’s fully aware of EA’s shortcomings (he tried to play SimCity 5 at launch just like the rest of us). But when stacked up against banks that tanked the U.S. economy , a cruise line that left passengers stranded in their own feces and an oil company that’s currently cleaning up a major spill in Arkansas, it’s hard to justify calling EA the worst of the worst.

But not everyone is getting the joke. Despite appearing as a clearly photoshopped JPEG in Typewriter font, many are still reacting to the post as if it were real.

“I still don’t like EA, but damn that was a sick burn,” writes one anonymous poster on a Tumblr reblogging of the statement.

Another user on 4Chan, which helped lead the effort to make EA the Worst Company in America by encouraging disgruntled gamers to swamp the poll, tore the statement to shreds, seeming to think it was legitimate.

“No wonder everyone hates you,” the user writes. “This is the way you treat the customers who buy your sh*tty games.”

A quick scan of responses to the piece on Twitter shows these commenters aren’t alone. Most of the tweets about the piece praise EA for its bold response.

Obviously this isn’t the first time the Internet has missed the boat on a piece of satire. But Bridgman said he was honestly surprised that people didn’t get it.

“I just can’t believe anyone on the internet still trusts anything,” he said. “I think a lot of people just wanted it to be real. Maybe if I had used more cursing more people would have realized it was a joke.”