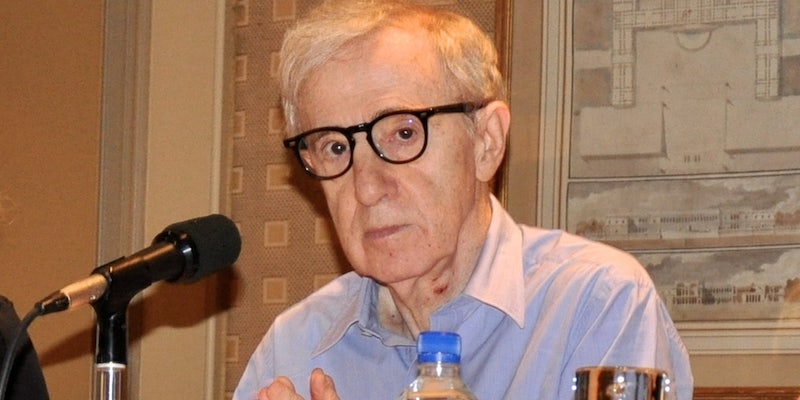 Farrow details for New York Times columnist Nicholas Kristof the sexual abuse she allegedly suffered at the hands of her father.

Dylan Farrow, daughter of Mia Farrow and Woody Allen, details for New York Times columnist Nicholas Kristof the sexual abuse she allegedly suffered at the hands of her father.

Woody Allen was honored with a lifetime achievement award at the 2014 Golden Globes, sparking controversy over whether a Hollywood icon accused of molesting his own child deserved the celebration. (The Onion summed it up in a fake Woody Allen op-ed titled “Boy, I’ve Really Put You in a Tough Spot, Haven’t I?”)

In a few short paragraphs, she goes into detail about what occurred throughout her childhood with Allen, then in his late 50s. Farrow alleges that his abuses went beyond “inappropriate touching”; she describes a sexual assault in the attic of their house at age 7. She says she was traumatized for more than 20 years.

He talked to me while he did it, whispering that I was a good girl, that this was our secret, promising that we’d go to Paris and I’d be a star in his movies. I remember staring at that toy train, focusing on it as it traveled in its circle around the attic. To this day, I find it difficult to look at toy trains.

Kristof has Farrow’s full statement on his blog.

These things happened so often, so routinely, so skillfully hidden from a mother that would have protected me had she known, that I thought it was normal. I thought this was how fathers doted on their daughters. But what he did to me in the attic felt different. I couldn’t keep the secret anymore. …

I didn’t know that my father would use his sexual relationship with my sister to cover up the abuse he inflicted on me. I didn’t know that he would accuse my mother of planting the abuse in my head and call her a liar for defending me. I didn’t know that I would be made to recount my story over and over again, to doctor after doctor, pushed to see if I’d admit I was lying as part of a legal battle I couldn’t possibly understand. At one point, my mother sat me down and told me that I wouldn’t be in trouble if I was lying—that I could take it all back. I couldn’t. It was all true. But sexual abuse claims against the powerful stall more easily. There were experts willing attack my credibility. There were doctors willing to gaslight an abused child.

“All but a precious few (my heroes) turned a blind eye,” she says. “That he got away with what he did haunted me.”

Most found it easier to accept the ambiguity, to say, “who can say what happened,” to pretend that nothing was wrong. Actors praised him at awards shows. Networks put him on TV. Critics put him in magazines. Each time I saw my abuser’s face—on a poster, on a T-shirt, on television—I could only hide my panic until I found a place to be alone and fall apart.

Allen is up for an Oscar this year: best original screenplay for Blue Jasmine, whose lead actress, Cate Blanchett, is nominated for best actress. Farrow pleads to her as well: “What if it had been your child?”

Allen has denied the allegations. He has never been convicted. It’s a “he said, she said” issue, as Farrow acknowledges. She has little recourse in seeking justice, but she still has a voice. The least we can do is listen.