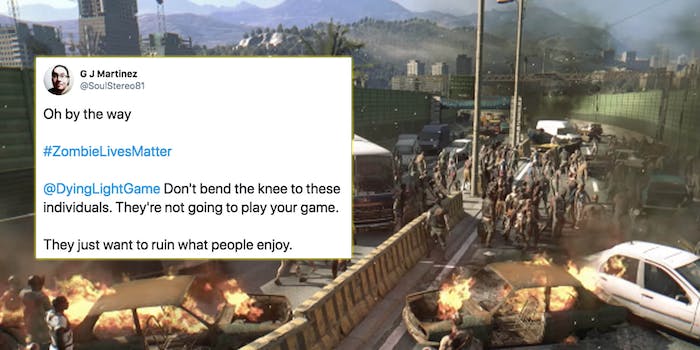 Dying Light, a zombie video game, is facing backlash from all directions.

The Twitter account for a zombie video game is facing backlash from all directions after posting, and subsequently deleting, a tweet with the slogan “Zombie Lives Matter.”

The Dying Light series is a first-person zombie apocalypse action game. The player navigates through a dying world in which zombies have begun to take over. A new DLC, Dying Light: Hellraid, is set to be released this summer.

In promoting its upcoming content, @DyingLightGame shared a tweet encouraging fans to “support your local zombies in May — Zombie Awareness Month.” The tweet also contained what appears to be a screenshot from the game with the words “Zombie Lives Matter” written across it, an obvious play on “Black Lives Matter.”

Co-opting a serious slogan used to push back against violent racism toward Black people didn’t sit well with some, and a few commented.

“Y’all might need to have a word with whoever’s idea this was,” suggested @NCR_Lou_Tenant. “This is a really bad look on y’all.”

The tweet was removed without any note from the social media team, and that appears to be when the trouble really started.

People were livid with what they saw as the company “caving” to “social justice warriors,” and came out in droves to demand the tweet be reinstated.

“Dying Light made a harmless tweet, but now the pronoun police are losing their shit cuz we can no longer have fun with slogans,” wrote @SophNar0747. “It’s now deleted but if you search for @dyinglightgame you see nothing but anger. Game devs, stop giving in to the rage of all these unhappy fucks.”

The claim that the game’s mentions were filled with “nothing but anger” after the tweet is unable to be substantiated, but it did the trick in stirring people up.

“Damn what was the dying light account thinking LOL,” tweeted @LeoRezArt. “Don’t they know you can’t joke on the internet?!”

The Dying Light developers have not responded to the controversy on Twitter and have not shared the image or the original tweet again.