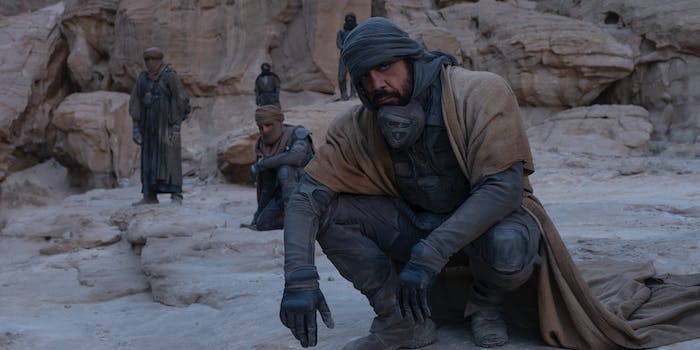 ‘Dune’ sparks conversations around its Islamic and MENA influences

'Dune's author was upfront about the Islamic and Arabic influences on the book.

Much has been said about the properties that Dune has influenced in the nearly 60 years since it was published in the lead-up to the release of Denis Villeneuve’s Dune adaptation. But as the 2021 version of Dune becomes both a critical and commercial success, some fans are once again highlighting the religious and cultural influences on Dune itself, which they argue have been reduced to set dressing or were downright erased.

“Talking in Arabic and you guys are like, ‘no, this reminds me of Nevada,” Abby said.

In that scene, Paul is being called Lisan al-Gaib by the Fremen because they believe that he is the prophesied legendary figure who is both an outsider and the son of a Bene Gesserit. (“Mahdi,” defined as “The One Who Will Lead Us to Paradise” in the glossary, is used similarly.)

In a follow-up video, Abby, who loved the film, argued that the reason people keep denying or downplaying Dune’s Middle Eastern influences is because of the fact that they’re having trouble wrestling with liking Dune with their dislike of Islamic culture.

You don’t need to read the entirety of Dune, Frank Herbert’s dense novel, to see just how much Islamic, Arabic, and Middle Eastern, and North African (MENA) influence is in the original text. Just take a look at the glossary included among the book’s appendices, which include dozens of Arabic names, terms, and phrases used or appropriated to build Dune’s world. Spice (or melange), the resource that can only be found on Arrakis and is instrumental to interstellar space travel, is a pretty blatant stand-in for crude oil in the Middle East in the ’60s; the name Arrakis also sounds similar to Iraq. Dune also hints at an anti-colonial crusade and the war to come in the visions Paul Atreides has (which is referred to as a jihad, a word that isn’t used in the 2021 film).

You can take Herbert, who was open about many of those influences, at his word in regards to those influences. You can point to Herbert’s editors, who questioned what they described as the “Muslim flavour” of Dune and asked Herbert “What’s up with all the Islam?” And you can take the word of Herbert’s son Brian, who wrote Dune’s afterward and said that “Among other things, the Dune universe is a spiritual melting pot, a far future in which religious beliefs have combined into interesting forms. Discerning readers will recognize Buddhism, Sufi Mysticism and other Islamic belief systems, Catholicism, Protestantism, Judaism, and Hinduism.” Brian Herbert also drew comparisons between Paul Atreides (played by Timothée Chalamet in the 2021 film) and T.E. Lawrence, a white British man who led an Arabic army against the Turks during World War I (and whose life story was depicted on-screen in the 1962 film Lawrence of Arabia).

But many of those touchstones are erased or blended together, some of which are only present in the film’s aesthetics or the music. The most blatant example is the lack of actors of MENA descent among the main cast of Dune, particularly among the Fremen characters.

If this kind of commentary sounds familiar, it should. Critics have taken to highlighting the MENA and Islamic erasure from Dune since the casting was announced—and again when the first trailer was released in 2020. Others have described Dune as a white savior story, although Villeneuve has pushed back on that assessment. And as Dune debuted in theaters and on HBO Max, it’s resurfaced in some reviews and analyses, with some arguing that the erasure flattens the film.

Some members of Dune’s creative team used the distance between Herbert’s novel and today (and today to the timeline of Dune) to try to shape how it did tackle some of those Islamic and MENA influences.

“Dipping into Islam and the Arab world was sufficient to make it exotic in 1960s, but not today—we need to go further to get the exotic element and show transformation,” Dune co-writer Jon Spaihts said in an October 2020 panel (via Tor).

David J. Peterson, the conlanger who created the Dothraki and Valyrian languages on Game of Thrones and the Fremen language in Dune, argued that given how far into the future the story takes place, Arabic as we know it—and as many of those words appear in Dune—wouldn’t have survived.

“The time depth of the Dune books makes the amount of recognizable Arabic that survived completely (and I mean COMPLETELY) impossible,” he wrote in a May 2020 Reddit AMA. “Utterly. Since that was the case, I was left to simply accept that fact and move on in the direction I thought made the most sense. My hope is that the direction I took will prove satisfactory.”

Earlier this week, Legendary Pictures announced that Villeneuve would be making the Dune sequel (the second half of Dune) and Villeneuve said he’d like to adapt Dune Messiah as well. It’s too soon to know just how Paul Atreides’ story will be tackled, but given that Dune and Dune Messiah include Paul accepting the role as the Fremen’s messiah, forcing the galaxy’s emperor to abdicate his throne, and then launching a jihad that resulted in the deaths of 61 billion people, both Paul and the story Herbert wanted to tell becomes more complicated; it’s not quite the white savior narrative or simple hero’s journey being set up or alluded to in the first film.

And like Dune itself, so many of those discussions about MENA and Islamic representation and influence for future films are only just beginning.