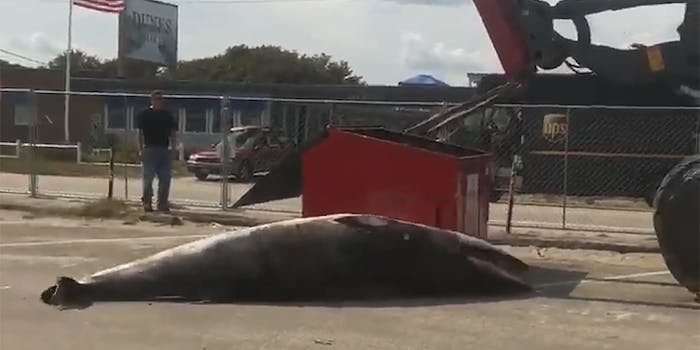 Behold Dumpster Whale, the dead whale that didn’t fit into a dumpster

What do you do with a dead whale? You treat it with much more respect than leaving it out in a parking lot in Rye, New Hampshire, hopefully.

After a minke whale washed ashore off the coast between Rye and the Isle of Shoals earlier this week, the 2-ton mammal simply lay on the beach where it had first made landfall. It remained there until it was taken away to a dumpster, where the idea was to contain the once-magnificent animal until it could be transported to a special facility for a necropsy. Researchers at the New England Aquarium would then assist in figuring out just how the whale passed away in the first place.

A dead whale that flopped off the side of a dumpster because it didn’t fit spent last night in the parking lot of Jenness Beach in Rye #NH. The state finally delivered a bigger dumpster this a.m. to haul the whale to a composting site for an autopsy. https://t.co/bcDqGGFTSC pic.twitter.com/vIo49tB27c

Unfortunately, its trip to containment was more like a humiliating spectacle: A loader tried fitting the whale into the dumpster, failed, and instead flopped the dead whale onto the pavement. It was not a pretty sight.

Then, as the whale awaited a new, larger dumpster, it sat out in the parking lot overnight. Once it was placed in the new container, it was then transported to a new location where marine biologists will study its remains. Afterward, the whale’s corpse will be composted.

As morbid as the situation is and as unfortunate as the poor animal has been treated, people are still finding humor in the situation.

Please tell me the headline was "A Whale of a Fail"

Is the guy working the lift name Peter Griffin by any chance?

In a world…
where our lowest expectation and greatest fears are not enough.
Comes a word…
to fuse in a new portmanteau our disgust, disappointment, and despondency.

[whisper]
Coming too soon to a reality near you.

did the operator think the whale would just fold in the middle and go in?

Maybe we shouldn’t be laughing, but we totally are.

They thought it would fit?

Others are understandably appalled.

This is filling me with unfettered rage.

What is wrong with people?

A dead whale was treated like an enormous piece of garbage, which is abhorrent. The only thing left to do is try and make peace with it.

Honestly, there’s no better analogy for 2018.