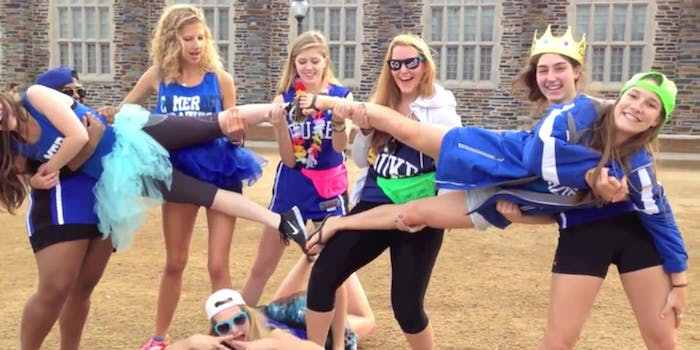 This Duke sorority rap video is a must-see, and not because it’s good

This is basically the Lambda rap scene from Revenge of the Nerds.

Do a search for sorority recruitment rap videos on YouTube, and you’ll find a whole subgenre of awful performances meant to espouse the virtues of friendship and sisterhood. They also tend to take liberties with the “rap” genre.

This recent Alpha Delta Pi sorority rap video from Duke is one of those so-bad-it’s-good moments. The editing is inexplicable, the intermittent use of Rihanna’s “Diamonds” is baffling, and the rapping is cringeworthy. But you somehow get the feeling these girls actually like each other and have a sense of humor about how bad this video is.

This is basically every college comedy where the “uncool” sorority triumphs over the popular girls by learning a valuable lesson about themselves and winning the talent show. This is basically the Lambda rap scene from Revenge of the Nerds.