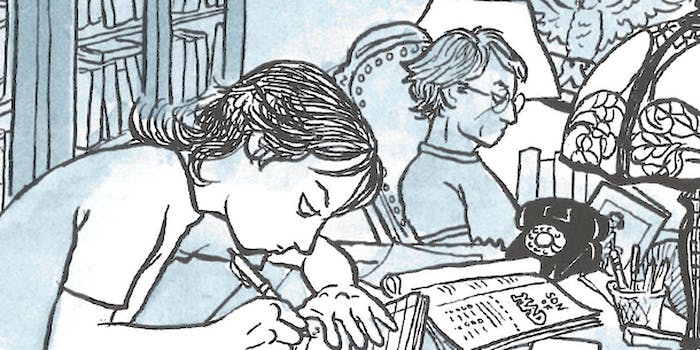 The real victims of this controversy aren't the students who choose not to read it.

Last week, as college freshman moved onto various campuses oh-so-invitingly threatening female students with disturbing fraternity “antics,” members of Duke’s freshman class arrived on the scene causing a ruckus of their own. Several of them, lead by incoming freshman Brian Grasso, were refusing to read one of their summer reading assignments: Alison Bechdel’s graphic novel Fun Home.

Fun Home has long been featured on queer studies syllabi, as well as on any coming-of-age queer’s personal bookshelf, but with the popularity of Lisa Kron and Jeanine Tesori’s Tony Award-winning musical adaptation, colleges and universities like Duke are beginning to regard it as essential introductory worldview-expanding literature. And rightfully so. The graphic novel functions as a memoir charting Bechdel coming to terms with her queerness, amid finding out her father was gay, all just a few short weeks before his suicide. 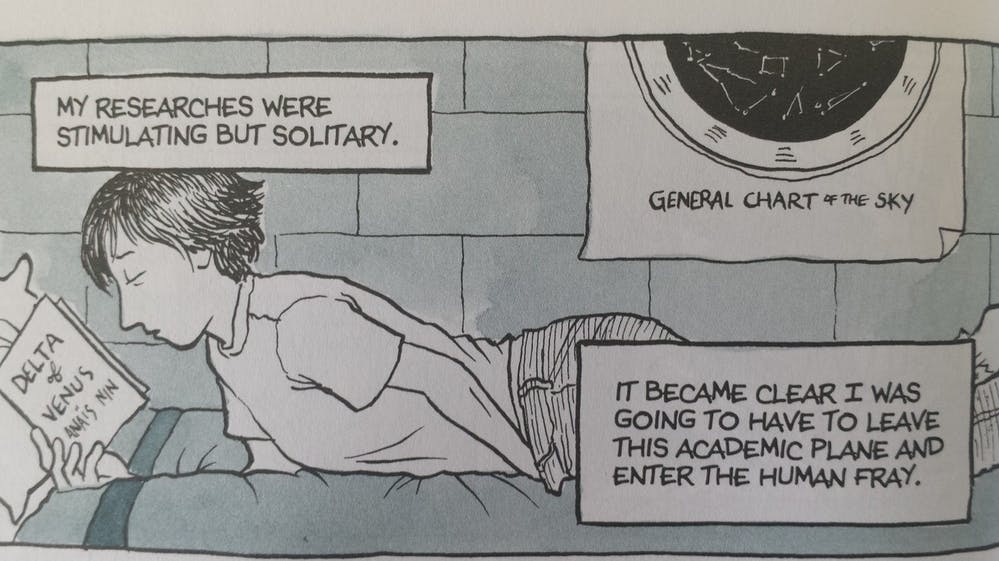 Here is where some of the Duke freshman class’s issues apparently lie. According to the Duke Chronicle, students were boycotting the book due to “moral concerns,” ranging from “pornographic” depictions of women to being forced to compromise their Christian beliefs by reading a queer novel:

“…Several freshmen agreed with Grasso that the novel’s images conflicted with their beliefs. Freshman Bianca D’Souza said that while the novel discussed important topics, she did not find the sexual interactions appropriate and could not bring herself to view the images depicting nudity.

Freshman Jeffrey Wubbenhorst based his decision not to read the book on its graphic novel format.

‘The nature of ‘Fun Home’ means that content that I might have consented to read in print now violates my conscience due to its pornographic nature,’ he wrote in an email.

Grasso said that many students privately messaged him thanking him for the post and agreeing with his viewpoint. He explained that he knew the post would be controversial but wanted to make sure students with similar Christian beliefs did not feel alone, adding that he also heard from several students with non-Christian backgrounds who chose not to read the book for moral reasons.”

Of course, the graphic novel also contains an image of a dick (attached to a cadaver at the family funeral home), but no one seemed too upset about that. Bizarrely, the Washington Post gave Grasso an even bigger platform, and allowed him to run an op-ed in which he explained that his problem was not with the book’s inclusion of queer folks, but rather with the downright pornographic images of women:

Here are the rest of the panels in question from my own lovingly fluid-stained copy of Fun Home (stained by tears, guys, duh): 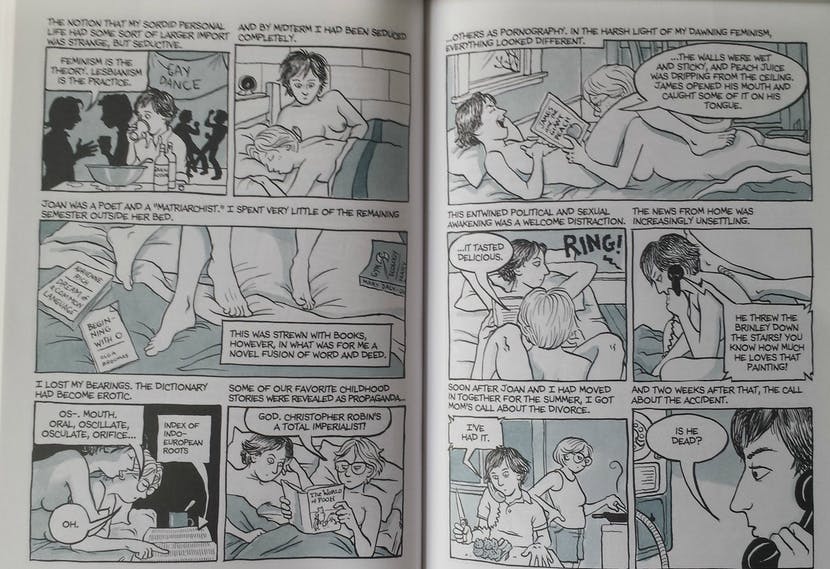 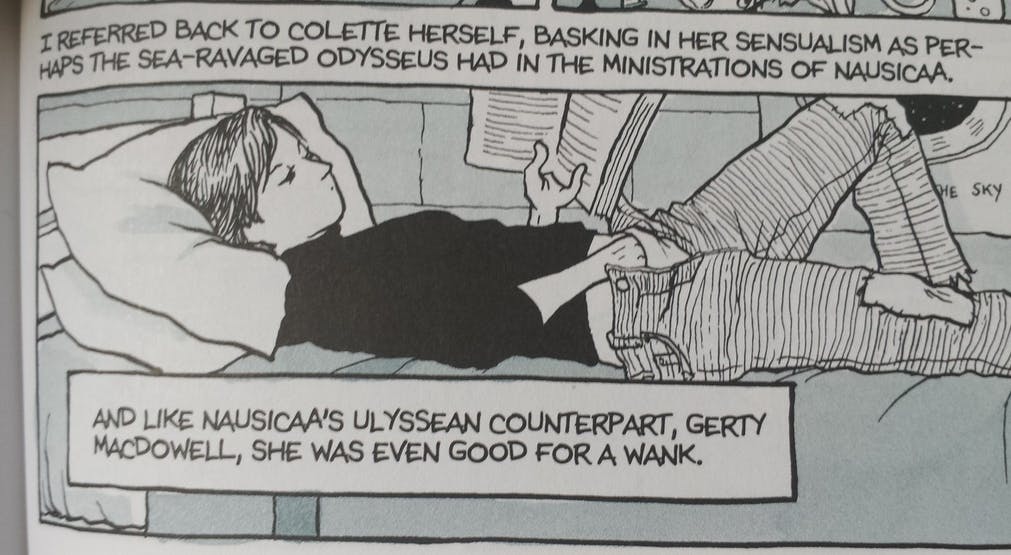 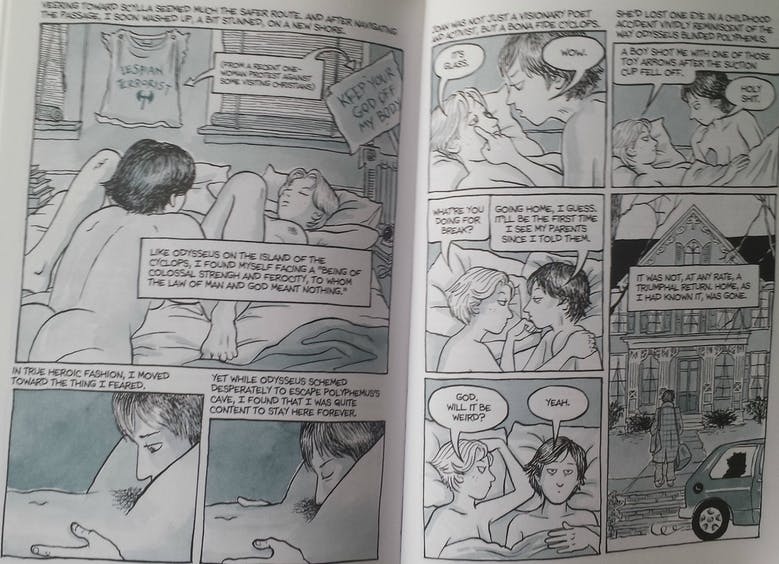 Let’s start small. Shielding your precious eyes from the depictions of queer/female sexuality in Fun Home has one obvious consequence: It means you will continue to be the douchebag on campus, and in life, who runs around saying shit like, “But so like, how do lesbians do it?” prompting the need for queer women to write exhausting listicles like this for the rest of our natural lives. This is a question that you could have answered for yourself, at least in part, by doing your goddamned summer reading homework.

Now let’s follow the ripple effect outward. If you went to elementary, middle, and high school in America, chances are, you got shitty sex ed. It was probably super heteronormative, cisnormative, and lacking in clear information about consent and pleasure, which left you filling in the blanks on your own with other media. Thanks to the patriarchy, that other media effectively guarantees that we only stay clued in on penis-in-vagina sex, with the beginning, middle, and end of it centered around the penis’s orgasm. So, unless you go specifically looking to educate yourself on it, your default sex ed likely left you with a crude understanding of female sexuality, sex organs, and all the magic that can happen in between.

What I’m getting at here is that the real victims of people who refuse to educate themselves on the nuance and depth of human sexuality are their future sex partners. Considering that they refuse to look at or engage with any material that might elaborate on their Biblical sexual upbringing, which I guarantee contained gaping truth-holes, how will they ever expand his sexual literacy? Assuming they find the woman with whom they’d like to share the sacred, one-man-one-woman act of sex, don’t they want her to experience the best sex she could possibly have? Because that’s a two-way street, and they’re doing a disservice to both themselves and their future forever-loves by not engaging with sexual content to expand their understanding of female pleasure.

Let’s talk about the global implications of all the Duke freshman who refuse to read Fun Home. Surely some of them will go on to become screenwriters, novelists, educators, doctors. Their refusal to engage with content written by the woman who literally invented the Bechdel Test will only reinforce the problems that it screens for. If those future screenwriters and novelists refuse to read about queer people from a queer perspective now, we will only miss out on more awesome, complex queer characters in the future. If those future doctors and educators refuse to look at how queer bodies have queer sex, we’ll only miss out on better, more inclusive understandings of gender and sexuality in the context of education and public health.

Grasso states that he “plans on studying Global Health and is passionate promoting [sic] economic development in sub-Saharan Africa.” So what happens when he goes out into that field without a fully realized understanding of how HIV/AIDS is transmitted because he doesn’t know what queer sex looks like?

The implications of blinding oneself to material like Fun Home extend far beyond “I don’t want to look at that, it’s icky.” There are real, flesh-and-bone people represented by the story Alison Bechdel is telling and to willfully ignore the truthfulness and authenticity of their experience is to willfully deny them their humanity.