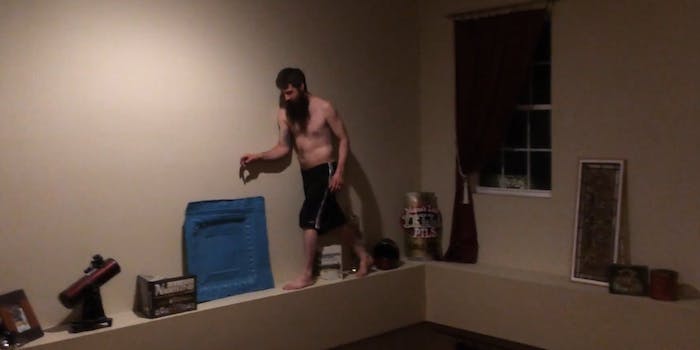 Drunk husband gets dangerously close to disaster on ledge

Maybe this man's wife should childproof the house for him.

You know those dogshaming photos where people take pictures of their pets wearing tags like “I am an underwear-eating jerk?” Well, this is the first example we’ve seen of a husband-shaming video.

YouTube user Taylor Casanova recorded her husband’s drunken antics to show his mother, presumably in the hope that he’d stop endangering his life while plastered. As she puts it in the video description, “When my husband has a few too many, he becomes a magical suburban gymnast.”

At first, the video looks pretty normal. It’s just a shirtless dude walking carefully around the edge of a room, with his wife saying in the background, “It’s like babysitting, I swear to god.” Then the camera pans down and you realize he’s balancing on a ledge at least 15 feet off the ground.

We’d like to say “Don’t drink and climb,” but this video proves that some people are completely chill about scaling walls while hammered. It’s kind of impressive, in a way.

Seriously, though: Don’t drink and climb.