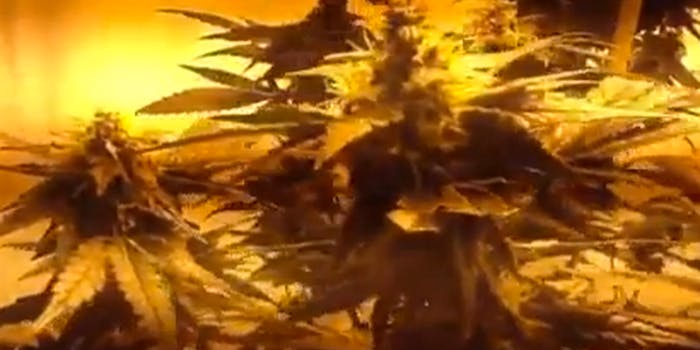 Kyle Thomas Berr was arraigned Wednesday morning for possessing more than 15 marijuana plants in his home. The proof was on YouTube.

A New Hampshire man was arrested for growing marijuana on Wednesday after posting video documentation of his budding collection to YouTube.

Kyle Thomas Berry, 40, was arraigned Wednesday morning for possessing more than 15 marijuana plants in his home, a hefty collection that police estimated to hold a $16,000 value.

Investigators within the Rockingham County Sheriff’s Drug Task Force began their search for the Auburn, N.H., man shortly after they came across a YouTube channel containing 35 videos that detailed the full-length of the marijuana growing process, with titles ranging from the arcane “First & Second Grow-Rooms” to the celebratory “Merry Christmas,” wherein he takes the time to wish his viewers—Berry’s channel has 18 subscribers—happy holidays.

His most recent video, “YouTube 005,” finds Berry showcasing the elaborate setup found in his grow room.

Though he did go to some lengths to hide his visual identity from the clips, Berry did nothing to mask his voice and even less to keep any potential lines from being drawn between his operation and his legal identity. “The unpacking of my auto seeds from the UK,” from Oct. 17, shows a package that bears his first and last name. His YouTube channel contained his initials: Berry titled it BeginnergrowerKTB1.

Authorities reported that they began collecting information about Berry on Dec. 20, including his home address, a booking photo from a brief Nov. 2010 jail stint, and a picture from his driver’s license. They scanned his videos and found that one Oct. 26 clip shows a reflection of his face in a metallic wall and compared the legal photos to the image they saw before making the arrest.

On Tuesday, police charged Berry with illegal manufacture and possession of a controlled drug with intent to distribute. He was arrested Wednesday after deputies executed a search warrant. Police were able to locate the full lot of Berry’s growing stock, in addition to more than one pound of loose marijuana.

He is currently being held at the Rockingham County jail on a $7,500 cash bail.