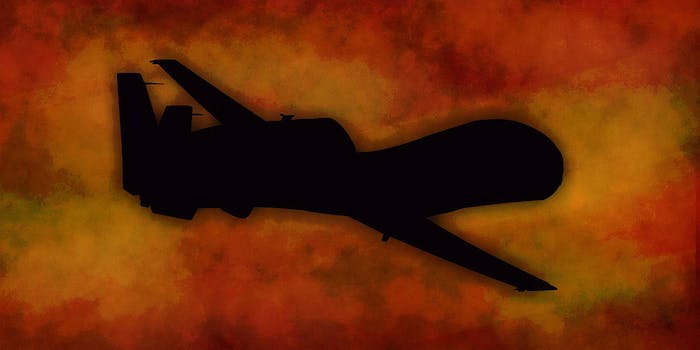 Why aren't drones saving us money?

This past weekend, President Barack Obama commemorated the first Memorial Day in 14 years during which the United States was not actively involved in a ground war. Citing the recent removal of troops in Afghanistan, the president told military families at Arlington National Cemetery: “We’ll continue to bring them home and reduce our forces further, down to an embassy presence by the end of next year.”

The major withdrawals from Afghanistan and Iraq he cited seem to represent the culmination of a promise that helped get Obama elected to office: the promise of an end to a perpetual state of war for the United States.

Outside of the major withdrawals of ground troops, however, Obama has largely expanded the scope and, thus, the cost of our military. With the budgetary restraints—commonly known as “sequestration”—enforced by Congress in 2013, the famously large annual budget for the Pentagon has shrunk through reforms and troop pullouts.

But for the next year, Obama has asked for a massive increase in federal defense spending. For this year, the president requested and received $500 billion for the Pentagon. For 2016, that number has ballooned to $561 billion—that’s $38 billion over the sequestration cap.

The drone program has only become just another growing sector of the overinflated Pentagon budget.

While this budget request was most certainly intended to quell Republican criticisms of Democrats’ “soft” defense policy ahead of the presidential race, the expansion of the budget should seem rather contradictory. Obama’s Department of Defense is famous for its “small footprint” approach—in which the U.S. favors surgical strikes with drones and special forces over large-scale invasions and nation building. While controversial for a variety of reasons, the drone program was supposed to usher in the era of a slimmer, smarter military for the U.S.

Instead, it appears the program has only become just another growing sector of the overinflated Pentagon budget. As other programs have tightened their belts, the drone program has seen a steady increase year-to-year, largely immune to the budget cuts. In the last decade, the amount of money spent on drones has grown by grown by 1,400 percent, while the number of drones in the Pentagon has grown ballooned from 200 to 7,500.

Keep in mind, these are just the numbers coming from the Pentagon. The Central Intelligence Agency, which is largely responsible for the infamous drone strikes in Pakistan and Yemen, doesn’t have to reveal how much they spend on drones.

What was supposed to be the face of a more streamlined military has simply become, for better or worse, the new favorite toy of an unstoppable empire. The expansion of drone strikes across the Middle East has largely been proven to create more terrorists than it eliminates. In the cases in which a drone does kill someone, they’re far more likely to be an innocent bystander than a trained terrorist.

All the damage done to America’s image abroad from the botched invasions in Iraq and Afghanistan has, thus, not been remedied by bringing death from above instead of below. In fact, in countries like Pakistan, where erroneous drone strikes have made us more hated than anywhere else on Earth, the program has arguably only made the problem worse.

What was supposed to be the face of a more streamlined military has simply become, for better or worse, the new favorite toy of an unstoppable empire.

For years, Pentagon officials have promised that drones will save the U.S. money and keep soldiers away from the battlefield. In 2011, Congress explored the opportunity of shrinking the drone budget by almost half a billion dollars, down from $5.1 billion to $4.6 billion.

But even in that plan, drone use for surveillance would shrink, while the use of Predator attack drones would actually increase. In 2012, the Pentagon announced cuts to more traditional military operations—such as ground assault vehicles and submarines—yet expanded the overall use of drones. In 2013, Air Force leaders spoke to USA Today about possibly scaling back the drone program—though it grew that year as well.

Overall, the use of drones abroad has attracted mass criticism in regard to its legality, effectiveness, and moralistic standing while escaping budgetary scrutiny. The Pentagon and the president have sold drone warfare as a futuristic solution to the problem of our expansive military budget but have failed to deliver. If drones could actually save us money, we should see a negative correlation between the amount of money spent on drones and the amount spent overall on the military. Instead, the military’s budget has climbed right alongside that of the drone program.

In many ways, drones are the easy way out for the U.S. military. They offer increased reach for our armed forces, offering power and security while seeming to make our operations more efficient.

The fact that it continues to fail on that first promise shows how densely bloated the military budget has become. Any attempt to trim the largest military budget in the world is met with cries of weakness or fear-mongering, and it’s easy to see how an expanded drone program could counter such criticism with an easier, cheaper approach to war. If only that were true.

The human cost cannot be ignored. Not only is there ripe concern for the staggering number of civilians lost to drone strikes, with 2,400 killed by 2014, but we too often buy into the allure convenience of mechanized warfare.

In many ways, drones are the easy way out for the U.S. military.

But there is no such thing as an easy war. While drone pilots might be out of the way of enemy bullets, they suffer from Post Traumatic Stress Disorder at the same rate as infantry fighters in combat. The daunting experience of remotely killing hundreds of human beings is too much for most, one of several reasons the Air Force has struggled to find and keep pilots in the job.

As long as Congress and the administration pay for drones, these soldiers and the people they are ordered to target will continue to pay the price for their use.