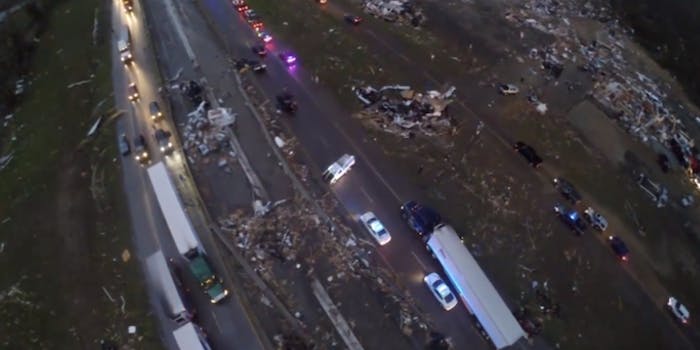 Sunday night, a tornado touched down just west of Little Rock and continued an 80-mile rampage through Arkansas.

Last night, a tornado touched down just west of Little Rock, Ark., and continued an 80-mile path of destruction, moving through suburbs and along interstates. At least 16 people are believed to be dead, and this morning, authorities are still sifting through the destruction. The tornado was believed to have been on the ground for more than a hour.

This drone footage was shot by KATV videographer and storm chaser Brian Emfinger shortly after the tornado moved through Mayflower, Ark., and shows the extent of the destruction along Interstate 40. Mayflower and Vilonia, where a tornado touched down in 2011, were the hardest hit. Tornadoes also touched down in Oklahoma.