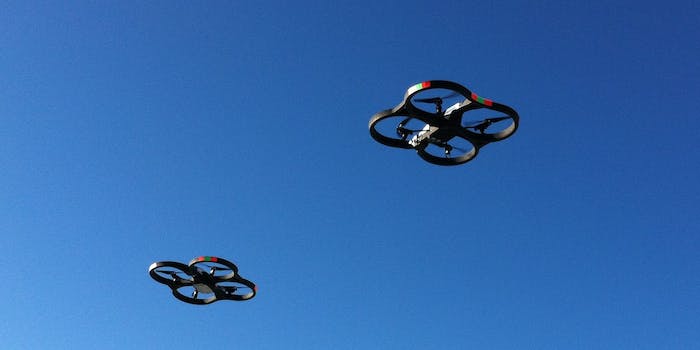 Somebody is going to have to figure out how to stop this.

Drones are potentially wonderful devices. They can help the graffiti artist in you reach even greater heights. They can shoot things from various elevations. They can scare the hell out of your cat.

And as we’ve already learned from one San Francisco startup, a drug-delivery drone soon could be in the offering. But here’s an idea that is sure to cause plenty of problems: A drone that delivers drugs into prison.

That’s exactly what happened last week in Mansfield, Ohio, when, according to Fox 8 in Cleveland, a drone dropped a package of heroin, marijuana, and tobacco near one of the recreation areas of the Mansfield Correctional Institution.

Not surprisingly, the package started a fight after one inmate picked it up and then apparently threw the package over a fence into another recreation yard. After the fight was quelled, authorities found the package, which contained 65.4 grams of marijuana, 6.6 grams of heroin, and 144 grams of tobacco, in an equipment room.

Prison officials also reviewed video, which revealed to them that a drone had dropped the package.

While Ohio Department of Rehabilitation and Correction spokeswoman JoEllen Smith told media outlets that drones carrying contraband hasn’t been much of a problem in the state, that doesn’t mean the agency isn’t worried about the future of droning.

“Our agency’s top security administrators are taking a broad approach to increase awareness and detection of unmanned aerial systems,” Smith said, via the Columbus Dispatch.

That’s a good idea, because, whether or not we want them, drones seemingly are coming for all of us, ready to drop packages of all shapes and sizes directly from the sky.