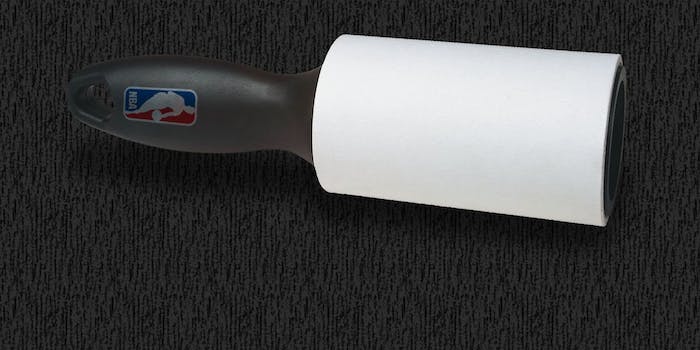 This is the only thing people will remember about the game.

Popular rapper and invested allegiant of absurdly popular athletic organizations, Drake is excited because, for once, his hometown basketball team, the Toronto Raptors, have made it to the NBA playoffs.

It’s a wild accomplishment for the long-struggling franchise, which currently finds itself tangled 1-1 with the Brooklyn Nets in the all-important first round. Drake, who’s always been a really big fan of his hometown team despite evidence suggesting otherwise, isn’t going to waste the chance to show up and offer some prominent support.

Only thing is, he forgot to clean his pants before showing up to last night’s Game 2 showdown at the Air Canada Centre. Sitting at his court side seat, he suddenly realized he had a whole mess of lint on his inseams. Cant have that. No sir. Raptors are in the playoffs. Whatever is Drake to do?

Fortunately, all A-class rappers know to carry a fully functioning lint remover on their person at all times. Drake whipped his out, worked the inseam on both legs, and eradicated the problem without fanfare.

The Raptors beat the Nets 100-95, but all anyone is ever going to remember is that GIF.