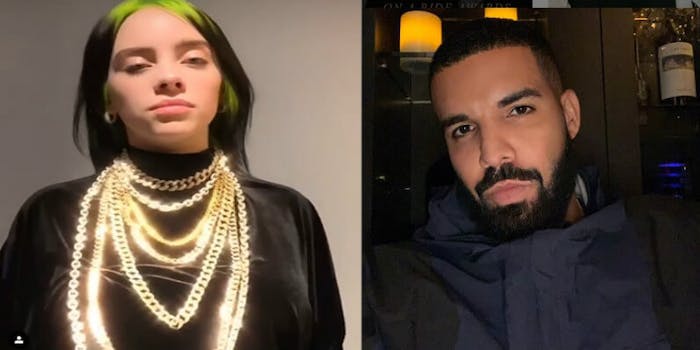 No, Drake did not shoot his shot with Billie Eilish on Instagram

The meme was picked up and shared as truth by pop culture websites.

A fake Instagram screenshot has Drake on the receiving end of fan backlash.

The Instagram comment to Billie Eilish, purportedly from the 33-year-old rapper and celebrating her 18th birthday, has caused fans to once again wonder why he’s corresponding with famous teenagers. But this one’s an apparent Photoshop job—and fake.

Posted with Drake’s picture under the Twitter handle @champagnepapi, the comment reads “ive been waiting” and was in reply to Billie Eilish sharing that she would be turning “18 tomorrow.”

Twitter users wasted no time jumping into action to chastise the 33-year-old rapper and call him out for predatory behavior.

Adding fuel to the fire, media outlets including TMZ and Media Take Out jumped on the meme and shared the fake Instagram post as gospel. TMZ deleted a tweet promoting the original blog, from Media Take Out. It ran with the headline “Billie Eilish Turns 18 And Drake Immediately Shoots His Shot!!” and remains unaltered on-site as of Monday.

The viral story was out of the bottle. @CrypticNoOne and DBRxVitor also posted memes throwing shade at Drake for his alleged “thirst.”

Drake on his way to Billie's house pic.twitter.com/VcdhipR3LQ

Drake really is real life Sicko Mode…remember the story last month about his creepy texts with Billie Eilish…she just turned 18 and this guy leaves "Ive Been Waiting" as a comment. #DrakeIsNasty #ChampagnePedophile #SurvivingDrake

Twitter user @mytwosince shared their outrage that the Drake meme was picked up by the media, writing:  “Why did TMZ tweet/delete this post insinuating @Drake was a pedophile? This was wrong, tasteless & defamatory, The article was originally posted by @MediaTakeOut & had a purported screenshot of #Drake saying he couldnt wait @ Billieeilish turned 18 under her IG post. Wth!”

DRAKE DID NOT COMMENT “IVE BEEN WAITING” ON BILLIE’S POST OF HER TURNING 18! THATS A JOKE RIGHT

TMZ deleted that story about Drake and Billie Eilish. I think that tweet was fake. No way he would be that dumb.

Why did @TMZ tweet/delete this post insinuating @Drake was a pedophile? This was wrong, tasteless & defamatory. The article was originally posted by @MediaTake_Out & had a purported screenshot of #Drake saying he couldn’t wait until @billieeilish turned 18 under her IG post. Wth! pic.twitter.com/PFcCyQIp0u

This is not Drake’s first time being called out for relationships with young female entertainers, however. His friendship with teen actress Millie Bobby Brown from Stranger Things is a constant source of criticism, and Eilish herself said that she and Drake have exchanged texts.

We don’t know why a 33-year-old man feels compelled to forge a close friendship with female teens via texts, but he isn’t posting thirsty public comments on their Instas.