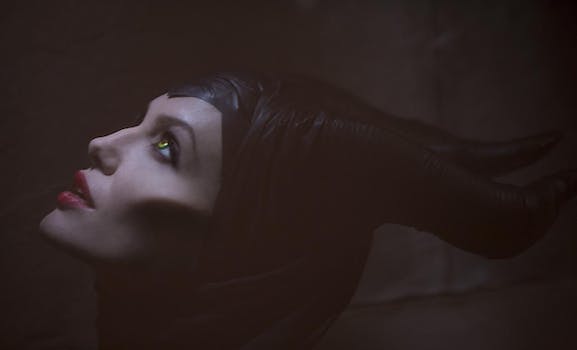 From Maleficent to Suicide Squad, villains are taking over pop culture.

For the world’s most famous sniveling brat, Draco Malfoy sure has a lot of fans.

Recently, the Internet’s favorite fantasy series (sorry, Game of Thrones) got a brief update from its creator, when Harry Potter scribe J.K. Rowling gave us the gift of Draco’s life story as an early Christmas present. Unveiled on fan site Pottermore, a lot of the Malfoy information she provided was already bits and pieces readers had gleaned from the books. However, revelations about Malfoy’s post-Hogwarts years, where he actually became more tolerant and less prejudiced against Muggles, were among the juiciest new material.

That said, Rowling also doesn’t pull punches about Malfoy’s place as a “bad boy” in the overall scope of the series. “I have often had cause to remark on how unnerved I have been by the number of girls who fell for this particular fictional character,” she wrote, cheekily adding, “(although I do not discount the appeal of Tom Felton, who plays Draco brilliantly in the films and, ironically, is about the nicest person you could meet).”

But beyond pointing out the good looks of the actor who played him, Rowling brings up a good point about Malfoy: Why is he such a beloved character? What’s interesting is that taken in conjunction with other recent developments in pop culture, Draco Malfoy’s fandom makes sense amidst a growing tendency on the part of spectators to gravitate towards villains, many of whom are even poised to come front and center; in some cases, they eclipse traditional “hero” characters. Keep in mind that in addition to DC’s Suicide Squad, Sony is working on a Sinister Six movie, as well as standalone film about Spider-Man villain Venom. And Marvel fans have been clamoring for a Loki film for years now. Even Disney decided to put a villain upfront recently, with the release of Maleficent.

Our current love for villains is complicated indeed, but it has roots in ancient storytelling traditions. If we truly look back at archetypes of good and evil, we notice that the walls start to come down, and our favorite heroes and villains start to look rather similar.

Television seems to have played a part in this lately by focusing on the idea of the anti-hero. Standing in contrast to the righteousness of contemporary movie characters, and instead harkening back to the morally ambiguous protagonists of ‘70s cinema, the television antiheroes of the last decade plus have been dark, dark, and dark, so much so that they often seem to cross into bad guy territory without even knowing it themselves. Mad Men’s Don Draper, Breaking Bad’s Walter White, and Tony Soprano of the like-named The Sopranos all fall into this category. Walter White and Tony Soprano were fascinating because they eventually proved to be as much the antagonists of their respective series as they were the “heroes.” Analyzing Walter White, Complex’s Frazier Tharpe writes, “The more time he spends exposed to the criminal element the more his soul erodes, until he becomes the villain of his own story in just one year in show time.”

However, while TV is just catching onto the appeal of antiheroes, they’ve been an ingrained part of our artistic experiences for hundreds of years. “There is also a certain sexiness to the anti-hero,” writes TV Addict’s Tiffany Vogt. “Perhaps we have to blame Hollywood for that. They have cast the ‘anti-hero’ in such a way that the role demands a certain amount of charm and seductiveness. But the lure of the anti-hero’ dates back as far as Emily Bronte and her depiction of Heathcliff in Wuthering Heights and Charlotte Bronte’s Mr. Rochester in Jane Eyre, or even Alexandre Dumas’s The Count of Monte Cristo. There is a universal appeal to the ‘bad boy’ that classic literature and modern film and television have all embraced.”

Meanwhile, in an Elite Daily piece entitled, “Villains Do It Better: Why This Generation Is Obsessed With The Anti-Hero,” Lauren Martin also expounds on the blurred distinctions between “anti-hero” and “villain” that modern TV has wrought. For her, it’s all about relatability. “We want to see…people like us, the people with flaws and mixed morals,” writes Martin. “We want to watch the people who don’t know how to behave correctly all the time and don’t always make the morally correct decision.”

But what’s the difference between outright villains and murky antiheroes? Any interesting protagonist sometimes makes the wrong decision, antihero or not. What about rooting for an antagonist who actively tries to make the wrong decision? Fantasy-Faction defines the antihero like so: “An antihero is often driven by impure, but sympathetic, motives. Vengeance is a big one. Who among us hasn’t wanted revenge? We might not agree with it, but we sympathize.” But the motives of a villain, the site warrants, are not usually as relatable. “A villain is driven by impure, but unsympathetic, motives—power for the sake of power, for example.”

Not that there’s only one kind of villain, mind you. In practice, there are just as many types of villains as protagonists. For instance, TV Tropes defines an “anti-villain” as “the opposite of an Anti-Hero, a villain with heroic goals, personality traits, and/or virtues.” They also have a section on the “villain protagonist.” How does that work, exactly? “An interesting twist on conventional storytelling is to make the Big Bad the plot’s protagonist. Sometimes (but not always), this villainous main character will even get the Sympathetic POV. On the other hand, it is not necessary for a villain to be sympathetic for them to be this trope. They simply need to be a villain whose morally reprehensible actions (however well-intentioned) are in no way glossed over or justified within the context of the story.”

Considering these qualifications, the Suicide Squad and Draco Malfoy would probably fall into the “anti-villain” category. Conversely, a character like TV’s Hannibal Lecter, of the titular NBC show, could be considered a “villain protagonist.”

But the above definitions still don’t answer why we’re more in love with villains that heroes lately . Think about it: Would anybody really say the most interesting part of The Dark Knight wasn’t The Joker? If Batman is a perfect antihero, than at his best, the Joker is an equally perfect villain.

After the Dark Knight Rises shooting in 2012, Wired’s Travis Langley looked at both the innocuous and more sinister reasons why we love villains so much. “Maybe you envy the power these evil characters wield,” he writes. “While that’s also a reason to adore superheroes, good guys don’t ache to dominate. Stories like Watchmen and Kingdom Come show how heroes become menaces when they try to take over. So when dreaming of superpowers, maybe you relate to characters who dream of power as well.”

However, our cultural love of villains isn’t entirely about some perverse kind of wish fulfillment. More importantly, interesting villains make for better stories. As Langley puts it, “Great heroes require great villains: Without criminals, Batman has nobody to hit and Superman’s a flying rescue worker searching for people to save from wrecks and natural disasters.” Which is why we’ll always be drawn to villains, more or less: Without villains, there would be no heroes.

But perhaps our interest in villains isn’t just about the way they compliment heroes, but also their similarity to them. Research has determined that psychologically, the two camps just aren’t that different.

To wit, Harry Potter might’ve been friends with Draco Malfoy if the circumstances were altered, and part of what makes Batman’s relationship with The Joker so fascinating is that they’ve always been two sides of the same coin. As the Clown Prince of Crime tells the Caped Crusader in The Dark Knight, “To them, you’re just a freak. Like me.”

And if Batman and The Joker aren’t that different, the question then becomes, what if we’re not that different either? As Batman writer Scott Snyder told Comics Alliance, “The Joker is the most fun for me because what he really does, and I think this speaks to what maybe you’re talking about with the psychology; he’s not just scary because he does these terrible things, but he makes you afraid of the things you think might be true about yourself.”

Comics site Under The Mask echoed this sentiment, proposing, “Reading comic books, playing video games, and watching movies or television series about villains allow us to explore topics that would otherwise be morally and socially unacceptable. It is a shared cultural experience, equally conformist and subversive.” And Patricia Hernandez at gaming site Kotaku also talked about this, particularly as it relates to the idea of “bosses.” Hernandez writes, “These are—to simplify—the parts of ourselves that we hide for the sake of society. Confronting this part of ourselves allows us to grow as human beings… But this also means that the most devilish, disturbing villains are a mirror of ourselves, of the society that created them.”

This is the heart of why we can’t look away from a good villain; part of us suspects that deep down, we’re capable of being villains, too. We’ve all heard by now how Vince Gilligan wanted to use Breaking Bad to tell a story where Mr. Chips turns into Scarface. But the more interesting question is: What if Walter White was a little bit of Mr. Chips and a little bit of Scarface all along? What if he always had the Scarface side in him and that side simply overtook the Mr. Chips element of his personality over time?

Without this potential for dichotomy, villains are not nearly as interesting. Think of it this way: Darth Vader is more interesting than Anakin Skywalker. But Darth Vader is also most interesting because Anakin Skywalker is a part of him. It is the suggestion that our villainous sides and our heroic sides work in congress that makes characters like this work. Disney wouldn’t have invested $180 million in Maleficent, and the film would not have gone on to gross over $750 million worldwide, were there not some suggestion that there was more to the villains that we all grew up with.

As to whether the latest burst of villains in pop culture could ultimately be the start of a new trend or whether it’s just a quick burst of novelty, is still too soon to tell. But there’s no doubt that we’ll always love villains, as long as we love heroes, too. Why is why at least for the moment, Draco Malfoy is in good (or bad) company.