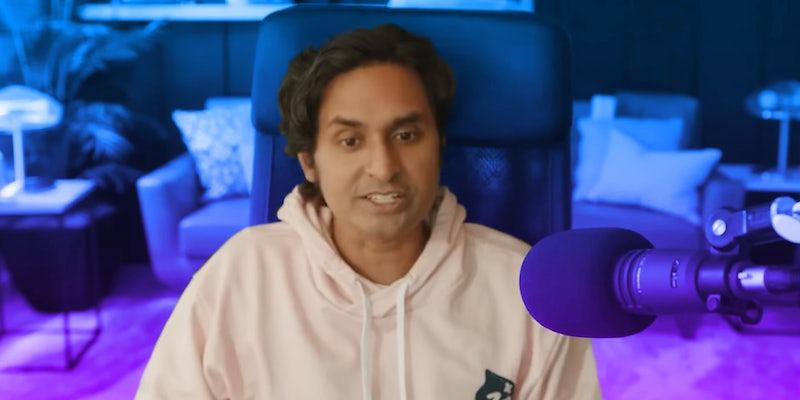 Dr. Alok Kanojia is the Twitch-streaming psychiatrist helping the online generation cope with the ills of the internet

Kanojia hopes he can be a small voice in a chorus of unkind voices on the internet.

Dr. Alok Kanojia is a 39-year-old Harvard-trained psychiatrist and CEO of his own successful life-coaching company, Healthy Gamer. But to almost a million YouTube subscribers and over 600,000 Twitch followers, he’s “Dr. K,” the host of HealthyGamerGG, a mental health platform he designed to “help the internet generation succeed.”

Kanojia’s company and platform are informed by the belief that there is not enough understanding about video game addiction or internet culture in psychiatry. Through his almost daily YouTube videos and Twitch streams, he tackles what he sees as the biggest mental health issues facing the internet generation with an unlikely source of wisdom for a culture steeped in modernity—the ascetic practices of monks living in an Ashram in Southern India.

Twenty years ago, Kanojia was a video game addict with a sub 2.0 GPA on the verge of dropping out of college. His father, an Indian immigrant who became a doctor with his wife in the U.S. after impoverished upbringings, had an idea of how to help. Within a few weeks, a taxi was dropping off Kanojia at the Prashanti Kutiram Ashram, an expansive countryside monastery in southern India. Plucked from his former slovenly class-skipping lifestyle in Austin, Texas and dropped into the monastic rigor of 4am wake-up calls, hours of meditation, and simple meals, Kanojia was in for a harsh adjustment. Sixty days later, he emerged with a new self-awareness.

“The biggest thing that changed, actually, was how I identified myself. I’d identified as being lazy, I’d identified as being undisciplined, and what I really got rid of is that identity,” Kanojia told Passionfruit. “I think a lot of what holds us back, what I learned in India is like, I am actually none of those things. Those are all abstractions of the mind. So what I started to really discover is not who I am, but rather who I am not.”

The penetrating silence and technological void forced Kanojia to reckon with himself. The life questions and interior examination that could previously be muffled through gaming were there to face him each and every minute of the day.

“It’s a very individualized approach to understanding who you are, where your desires come from, where your actions come from, and I loved it so much because it helped me answer questions that I’d always had about myself,” Kanojia recalled. “I realized that so much of what held me back was like these conceptions of living up to particular expectations.”

Kanojia’s older brother eventually became a lawyer. And Kanojia, freeing himself of the burden of expectations through his experience at the Ashram, finally felt free to focus on daily healthy actions that ended up landing him at his father’s aspirational career anyway. Despite his early attempts to seemingly sabotage the plan, he ended up becoming a medical doctor and psychiatrist studying at Tufts University and Harvard.

In his work and social circles, Kanojia knew many people who struggled with their mental health and internet addiction. After graduation, he decided to focus his practice on this new generation of people who grew up online, as he saw them as ill-equipped to cope with the manipulation that may come with the internet.

“What’s happening is that advertising and technology are understanding human behavior better than we are understanding ourselves,” Kanojia explained. “As that gets more sophisticated, we as human beings don’t know why we buy things, why we click on things without awareness. The humans are losing against technological advancement. What I really try to do is help people equip themselves with the knowledge of like, okay, how am I making these decisions? How do I work? How do I focus? How do I not get distracted?”

He soon became overwhelmed by the staggering number of clients looking for his expertise and realized that if he was really to reach as many people as possible, he needed to meet them on their platforms. Kanojia started streaming group discussion sessions on gaming and mental health on Twitch and recording videos for YouTube. He and his wife, Kruti, started Healthy Gamer, a startup through which they could provide life-coaching and resources to people struggling with video-game addiction and other mental health issues related to internet culture.

While his videos lack the polish and self-seriousness of other psychiatrists or mental health influencers—he’s takes his shoes off and sits cross-legged for television interviews, his speech is littered with “likes,” “um’s,” and F bombs—he is catering to a different crowd. And this crowd is flocking to him. From ashamed incels desperate for a relationship, to ADHD failing graduate students, to Iraq war veterans battling PTSD, and suicidal 12-year-old cyberbullying victims, he’s reaching people who, by the nature of their addiction, are usually unnapproachable without a screen.

And unlike many YouTube influencers, he’s not giving viewers the information that’s easy to hear: the dopamine-pumping, corporate-sponsored kind that promises easy solutions at the swipe of an AmEx. He is encouraging and empowering, but constantly shuttling viewers toward progress with his prescribed, uncomfortable steps—scheduling therapy, waking up early, eating a grapefruit a day, avoiding caffeine and soda, avoiding technology for the first 90 minutes of the day, curbing masturbation, and making friends in person. He has guided meditations for those who suffer from insomnia or have difficulty staying calm. He interviews some of the industry’s biggest video game streamers—like Asmongold, Pokimane, Reckful, LilyPichu—on their struggles with depression, laziness, existential dread, perfectionism, and more.

Reading through Kanojia’s video comments, he appears less of a Twitch streamer and more like a Moses, freeing a wounded group from the shackles of their mental illnesses and addiction.

“I have been feeling an overwhelming sense of shame due to some kind of social anxiety recently and this helped tremendously!” one YouTube commenter said.

“I burst out crying, thank you Dr. K, your understanding and kind words afterwards really help,” another said.

His audience includes: College students bemoaning their crippling anxiety surrounding school work and the many ways they procrastinate. A 17-year-old with autism in Denmark describing paralyzing fear of getting a job and misunderstanding social cues. An uninspired software developer considering a career change. A self-identified incel seeking advice about how to best communicate with a woman you have romantic feelings for. Like the collateral damage of an internet generation, he brings these huddled masses to his mountain to dispense his commandments.

“We get taught about history, but no one ever teaches us about us, like, how do I as a human being work?” Kanojia said. “Why do I behave this way? Where do my thoughts come from? Why is it that if I want to do something I’m not able to do it.”

The internet generation Kanojia serves is one he sees as burdened by what he calls an “epidemic of shame.”

“What’s happening is as the internet allows us to compare more, people tend to make unfair comparisons,” he said. “We look at one person and we’ll say, ‘That person makes more money than me, that person is better looking, that person has a healthier relationship.’ And so even though those are three separate people, when we engage in social media our brain doesn’t really process that. All we do is make comparisons and we’re always sort of ending up short.”

Kanojia hopes he can be a small voice in a chorus of unkind voices on the internet fostering self-worth, self-awareness, and encouragement for viewers to turn off the monitor once in a while.

“I kind of view it as my goma, my karma. I had this amazing opportunity to go and study very intensely, a particular tradition of stuff,” he said. “And then I also had the opportunity to become a medical doctor and a psychiatrist and sort of learn about what science has to say about the mind and how we work. And so I really hope to help people get a better understanding of the self.”
For the generation who has been described as the most anxious, loneliest, most misanthropic and least religious, Dr. K is holding the gap between the rubrics that guided generations of the past and the void many millennials feel today by equipping them with the tools to come out from behind the controllers, and grasp control of their life.

Casey Kleczek is a metro-Detroit based writer and filmmaker.