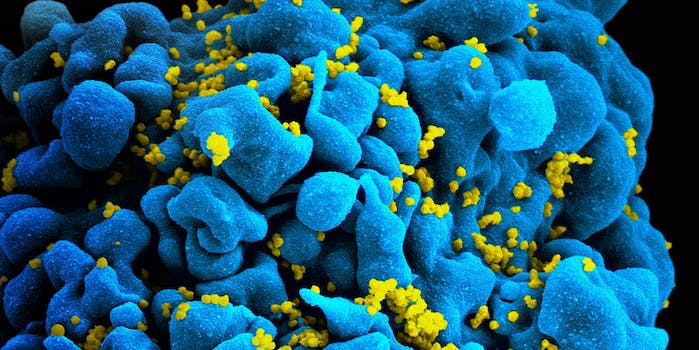 Is a new top level domain the secret to a radical new approach to charity?

HIV is still a killer disease. Every 10 seconds, someone dies of its fatal consequence, AIDS Please sit back and think about two friends close to you. Statistically, in the short time it takes you to read this, it might have killed them both—and yourself. There is another side to this story: HIV is now a manageable illness. We have made so much progress that in fact, with the proper treatment, you don’t have to die from it.

Unfortunately, we face a cruel medical divide when it comes to living with the virus. Many populations around the world don’t get the attention or resources they need to turn the tide in the same direction as we have with the many long-term survivors with HIV. Nobody on this planet should die of AIDS anymore, yet still we face millions of deaths every year and every single one of them is even more painful because the means are there to prevent it.

Today, we have the power to end AIDS. This hope should inspire us to push ever harder and look for new means and approaches to create a new momentum. The fight against AIDS is not only a question of money but also a question of our collective attention. The challenge, of course, is that everyone wants our money and everyone wants our attention. So how can we give the HIV movement the push it needs?

Back in 2010, my old friend, Philipp, stopped by to visit me in Berlin. We were working in very different fields and always relished in peaking into the other’s professional universe. Philipp was a creative director in one of Germany’s leading ad agencies, and I had been working for foundations and engaged in non-profit management and charitable work for years. We never thought about merging these worlds—until that day. As the evening went on, he told me about his latest idea. It was the greatest idea he and his colleagues might have had in a long time: .hiv, a top level domain like .com or .org, but with the ability to be a tool in a global AIDS awareness campaign. Philipp is a calm guy and his story was no sales pitch. However, it was so full of excitement and opportunity that I didn’t sleep for three nights. By the fourth night I knew I wanted to see this happen and I had to be a part of it.

It’s often small moments that change the course of your life, and make all the difference. For me, it was the birth of dotHIV.

To end AIDS, we have to achieve something that is different from classic charitable giving and different from standard awareness campaigns. Over the course of the past 10 years, global attention to HIV is in gradual decline.

Still, I believe it is possible to make the fight against AIDS a daily practice in our now digital lives. However, we need to take the next, and radical step. We need to establish it in the D.N.A. of the Internet. This is what .hiv is all about.

It is more than easy: Think about your grocery store for a moment—the one you visit regularly. Imagine if the store upgraded one of its entrance doors so that from that moment on, each and every time you enter the store through this door, you would trigger a donation to charity. We all would take the little detour!

Now let’s switch to the online world. Domain names are like doors to websites. They have two elements: The name (Google) and the top level domain (.com). Until now, the ending held little meaning. There’s .com for companies and .org for organizations, but all this is changing as new domain endings are coming to the web, offering better choices for website owners.

In our case, .hiv is the first and only domain ending designed exclusively for a social cause.

.hiv domains are essentially digital red ribbons, symbolizing solidarity with the global HIV. response. Every single .hiv address not only raises awareness but every click on a .hiv site triggers a small donation for the global fight against AIDS.

For 13€ (approximately $16.50) a month you can pick the same name as the .com address you already use and simply redirect your visitors on MyHomePage.hiv to MyHomePage.com. There you have it, the upgraded entrance to your store. Same website, two domain doors—but only .hiv triggers a donation.

The ALS Ice Bucket Challenge showed us powerfully how the Internet can trigger charitable giving and boost global awareness of a social cause. It resulted in an unprecedented peak of global interest in ALS, and we all now know a little bit more about it than before. Some of us also also know now how it is to shower with ice water.

What .hiv domain names can do will surpass the impressive results of the ice bucket campaign. Instead of a peak, we aim at raising the bar constantly.

One month ago we started global sales of .hiv domain names. Amazon.hiv, poz.hiv, cure.hiv, tumblr.hiv, and chanel.hiv have been registered and there have been more than 15,000 clicks on .hiv domains already. We are seeing more companies and more clicks every day.

This is a unique chance to build a new digital movement for the end of AIDS. To prevent unnecessary deaths—not only in the rich countries, but around the globe. To spark new awareness—not only for one day or the life span of a hashtag, but until we won the fight.

Whether you run a homepage or just go online: From now on we all have a choice to fight AIDS with single clicks, every day—which door will you choose?

CAROLIN SILBERNAGL is cofounder of dotHIV and C.E.O. of the dotHIV Registry. She makes sure that as many Web pages as possible wear the digital red ribbon. A political scientist from an academic background, Carolin did five years of educational work in which she gave students an understanding of social entrepreneurship before she decided to give it a try herself. Since 2011 she has led the first and only charitable top-level domain initiative, and she has already traveled around the globe four times in order to bring .hiv domain names to life. For more information visit Click4Life.hiv or Register.hiv.

This post originally appeared on The Advocate and has been reprinted with permission.