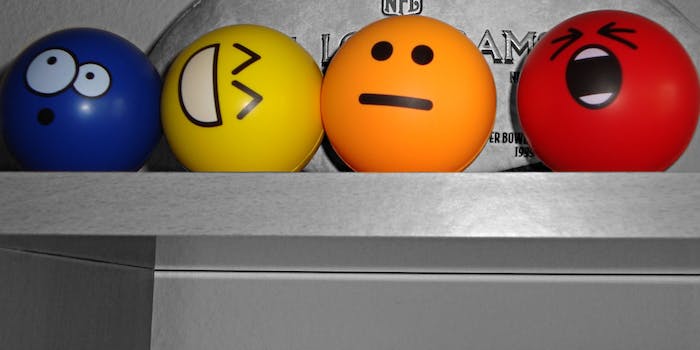 Nothing can beat the speed and simplicity of the emoticon.

If you’ve ever worked in a corporate environment, you’ve learned about the shortcomings of electronic communication, particularly email.

We’ve all heard that the majority of human communication is actually nonverbal: It’s body language, facial expression, and tone. But it can be hard to really believe that until you’re faced with a bald statement in email with no context: “The logo on the website is very big.” Is that a good thing? Am I fired? Promoted? What’s my name?

But human communication evolves extraordinarily quickly. Emoticons were invented for electronic text communication in 1982, and they have been part of the Web since its inception.

I remember my first interaction on the Web—the one kid in my school who’d been on the Internet helped me get connected. I got something working and Mike responded with a smiley. It just looked like random punctuation marks to me. “Turn your head,” he said. I looked over my shoulder. “No, rotate your head sideways.”

After a few attempts I finally saw it, but it wasn’t until many years later and I had some emails taken very much the wrong way that I truly embraced the emoticon. We all have, in fact. A recent Australian study showed that the human brain reacts the same way to emoticons as it does to actual faces.

Nothing can beat the speed and simplicity of the emoticon, but if you have an extra second, they must admit their superior: the reaction GIF, which offers all the nuances the 642 muscles in the human body (43 in the face alone!) can provide as operated by masters—our favorite celebrities and viral sensations. At any given moment, we can cast Tina Fey to play ourselves in the movie—and then recast Bill Cosby, if he’s right for the next moment.

By the way, the GIF is evolving as well. The new GFY format is smaller and more efficient, which will make them easier and faster to use, and able to communicate even greater complexity.

So powerful is the reaction GIF, in fact, that the very best GIFs are soon going to be displayed at the Museum of the Moving Image.

Of course, that impulse also inspired the Sistine Chapel, and if there’s a Michelangelo-level GIF out there, I haven’t seen it. But that doesn’t mean there won’t be—and soon. To have a ceiling for Signor Buonarotti to paint, Sixtus IV had to build the chapel in the first place.

If we’re lucky, the GFY gets us a step closer.