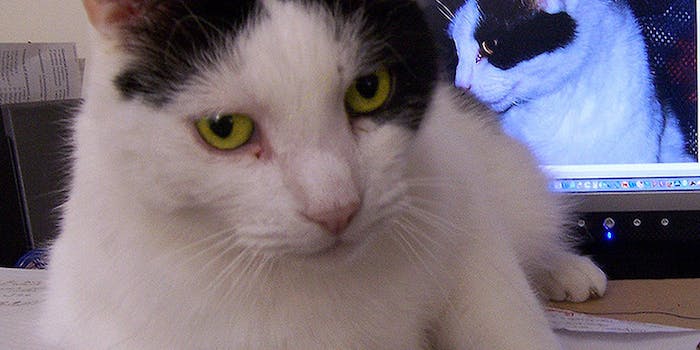 Dot Dot Dot: Step away from that kitten!

Is the Internet getting nicer as it gets older?

You! Step away from the kitten!

Not long ago, a video surfaced of two teen girls abusing a kitten until it lost consciousness. In the video the girls throw the kitten back and forth, tossing it up to the ceiling, holding it by the tail, whipping it back and forth long after it has passed out cold. The girls think this is all pretty funny until the unconscious cat accidentally scratches one of them.

Anonymous, the loose collective of hacktivists, took time out of their busy schedules DDoSing the CIA and persecuting cyberbullies to go after these two teen girls. Using one of their favorite weapons, they doxed the girls (that is, posted their personal information), reprimanding them: “Don’t fuck with the kittens.”

Unsettling as the inciting event is, the response is such that I don’t know if it would be possible to find another moment so, well, Internety.

In Western countries, the dog is the leading pet of choice—and about 7.5 million fewer homes house the dogs’ arch nemesis.

But cats are, without question, the Internet’s pet.

Sure, my dogs do cute and funny things all the time, and our favorite game is talking for one of the dogs when he’s doing something adorable/stupid—a kind of live loldogs. The results are dependably hilarious (at least to me and my wife), so I don’t see cats as being somehow inherently more meme-able.

So why on earth cats?

One of our Internet creation myths explains it because cats—which you do not have to walk—were more popular with the cave-dwellers who first colonized the Internet, back when people gave it stupid nicknames like “the ‘Net.” (That’s right, this happened. Never forget.)

I don’t buy that. Not just because the first people I knew on the Internet were not cave-dwellers. (I’m pretty sure the kid in my junior high class who first showed me Mosaic is now an international spy, though he denies it (obviously). I am not kidding. At all. I am also a little nervous about the fact that I have just written this and put it on the Internet.)

I think it’s rather that the culture of the Internet is sort of cat-like. Cats are independent. Cats enjoy a good pet, but they also want their private time. They march to their own drummer, do what they want, and basically do not give a fuck. And cats will mess with a mouse just for fun.

Speaking of which, Anonymous has been on quite the little charm-campaign of late. What happened to the amoral hacking, trolling, and pranks? Now they have causes. Now Anonymous defends the defenseless and champions political freedom.

There’s a fine line between reasonable political protest and gross, adolescent, pointless antics; Anonymous used to jump rope with it.

The recent #cutforbeiber campaign encouraged Beleibers to cut themselves after the teen star was caught smoking pot. I’m sure it this prank was justified as satire, but it amounted to a bunch of repellent images of young people’s bloody arms covered in self-inflicted wounds.

Was that little episode an act of true satire, at the level of Anthony Burgess, JT Leroy, or Brett Easton Ellis? Was it meant to force us to confront aspects of our culture that we would rather ignore, to realize that the ingenuous enthusiasm among the young for stars like Justin Bieber and the self-mutilation phenomenon are two sides of the same coin? Or was it merely an adolescent acting out of the envious, hoping to shock and shame—because the alternative is to be ignored?

I leave it to you and history to decide, but more to the point here: It was not Anonymous that perpetrated the Bieber hoax. It was 4chan, a related—but as the participants in a single message board—far more specific group.

That in particular is what is so fascinating about Anonymous’s charm campaign. It isn’t happening because the organization’s pollsters have decided that Anonymous isn’t trending well in the heartland—it has no leader, or bureaucracy for that matter. It is happening spontaneously, by mutual, widely dispersed consent among independent individuals.

Anonymous has now become famous. Perhaps the causal effect of the mainstream gaze is moderation: a universal moderation independent of any leadership, direction, or even conscious decisionmaking.

Or maybe all the Anons are just getting older.

Anonymous’s gleefully trollish sense of humor was once again on display. Their rambling justification for their action made it all seem like a big goof, a theater of the absurd.

Still, Anonymous was protecting kittens. Strip away the windy rhetoric and whatever you think about exposing teen girls’ personal info, Anonymous was simply being nice.

Every civilization has an underbelly. Those underbellies are civilizations of their own, complete with major political, economic, and cultural institutions, and Anonymous was once the Internet’s mafia.

The leading institution of the Internet’s underbelly is growing up. It’s getting both a sense of its own reputation, and a sense of its responsibility.

That doesn’t seem be possible, with no one to lead it, no real names, and no systematically planned strategies. But we must be wrong, because it is happening.

Sometimes it seems like the Internet is all underbelly. In a way, Anonymous—a loose, distributed organization whose defining characteristic is the fluid identity of its members—is a microcosm of the Internet as a whole. Let’s hope that like Anonymous, the whole Internet is getting nicer.