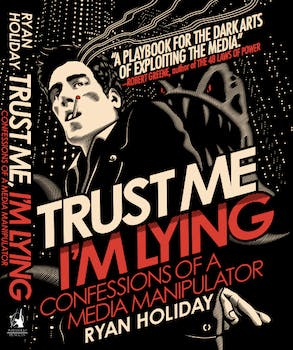 Dot Dot Dot: On the Internet, we are all the media

It’s a golden age for media manipulators. Why? Because they now have direct access to everyone.

This week, a 25-year-old publicist named Ryan Holiday published Trust Me, I’m Lying: Confessions of a Media Manipulator. The Daily Dot, along with many other publications, ran an interview with him and covered the release. We also ran an excerpt from the book.

What he claims is that blogs have changed the nature of truth in our society. Holiday describes buying ads for a movie, then vandalizing those same ads, taking pictures of his own vandalism, and sending them to blogs under fake names to make them believe that there’s a groundswell of protest against the movie.

Blogs, with little staff and no time, accept the story without question and post it. Enough of them do it, and everyone begins to believe that where there’s smoke, there’s fire. Soon, the New York Times is running the story. And often, by the time the NYT gets to it, it’s no longer a bullshit stunt. It’s true. The controversy is now real.

On the Internet, in a sense, we have all become the media. Stunts such as Holiday’s find their first legitimacy on a few personal blogs or in photos making the rounds on Facebook and Twitter. The bigger blogs, such as Gawker or Techcrunch, read those accounts, and now people are talking about it. Now those publishers don’t check out the inciting incident—if there even is a clear one at this point.

Finally, if it’s acknowledged by enough of these publications, the mainstream media picks it up. And now it’s a fact, the controversy is real. The lie has become the truth.

What would the Internet be without hoaxes, scams, paranoia, and conspiracy theories? In other words, the Internet, built to facilitate the transfer of knowledge between experts and academics, has become the greatest fertilizer distribution system ever devised by man.

Society, over the ages, has had to deal with such problems before. In other benighted ages, we’ve believed in werewolves, that the French ate their children, and that the South Sea Company was a good investment.

As society has progressed, we’ve evolved the social technology to correct for these issues. With the advent of the Internet, Holiday’s book reveals, our existing technology is obsolete, and we find ourselves again in a dark age.

As citizens of the Internet, we must not allow it to be dominated so completely by bullshit.

What does the solution look like? I’m not entirely sure, but if I may gaze into my navel for a moment, we founded the Daily Dot to be part of the solution. We are a newspaper, not a blog, because we view ourselves as building an institution that is deeply dedicated to the most essential values of journalism, just as much as it is to our love of the Internet.

When asked what a journalist does, here’s what our very own Lauren Orsini tells people. (And it’s one of the best definitions of journalism I’ve ever heard.)

“I’m a storyteller. It just so happens that the stories I tell are true.”

Here’s another one. Jack Knight, one of the greatest editors of the 20th century, once instructed a cub reporter thusly:

“Get the truth and print it.”

That’s not so easy in this new era (not that it ever really was), as Holiday describes. And we have been taken in before—and I’m sure we will be again. But we take those instances very seriously. We think about them hard and obsess over them. We are, first and foremost, an organization that is trying to answer a key question: How do we set the Internet, as a body politic, on a path of an increasing truth quotient, rather than one increasingly characterized by falsehood, rumor, and superstition?

Where will we find the antidote to the Ryan Holidays of the world? I don’t know, but I think it’s a cure worth looking for. Whatever it looks like, I think it will have to do with the basic attitude and essential value of journalism, best encapsulated, to my mind, in this old adage:

“If your mother says she loves you, check it out.”