There's nothing more powerful than looking simply and directly at another person.

A few months ago a 20-something young woman, iiGethii, uploaded a video to YouTube documenting her transition from boy to girl. In the space of about 90 seconds, you can watch her physiognomy and her expression change subtly but completely. She begins as a somewhat doleful young man and ends as an attractive young woman with a twinkle in her eye.

The video has collected almost 4 million views, and most of the comments are supportive.

That’s when it struck me: being different is difficult not so much because of the difference itself, but because of the isolation that it often brings. Even simple things can make you feel utterly alone. As one transgendered teen, Xander, wrote on Tumblr:

“One word [restroom] has never caused so much dread in such a short amount of time before. Hell, in school I’m currently not allowed in either gender bathroom.”

But Xander is not truly alone, because he has Tumblr. He, and others like him, can find a place online where they can share experiences and ask each other questions, such as “Where do you go to the restroom?” 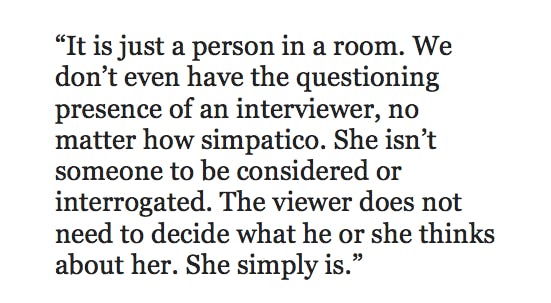 Xander made some of his first transgender friends through Tumblr, and it likely saved his life: “Honestly, not to sound depressed or pathetic, I don’t think I’d be here without it,” he said.

Obviously, there are the transgender YouTubers, as iiGethii’s inspiring video showed us, but it seems the same community has a slightly different flavor, a different tone, on Tumblr. There’s an aura of privacy there. Sure, you can find Xander’s tumblog if you really look for it, but it takes some looking. Tumblr’s just a little harder to use, and that’s sort of its value.

You can also hide your identity in a blog much more easily than on a vlog. As we all know these days, the fact that it’s so easy to hide your identity online can be the very thing that lets you be your true self—and helps you find others just like you.

As much as the Internet gives various communities such as transgendered teens a unique place to congregate, it also paints a very different picture than traditional media.

So how do we experience people like iiGethii outside the Internet? Before the Internet, my only immediate experience (that I’m aware of) with transgendered people came via snippets of daytime television—Ricki Lake or Jerry Springer—which made these people out to be as freakish and bizarre as possible. Even at the most compassionate and classy end of the TV spectrum (big-hearted, sensitive Oprah), there is still an inherent tendency to sensationalize and exoticize.

The perhaps more subtly exotic packaging in those sympathetic Oprah segments would, for me, actually have gone undetected before I watched iiGethii’s video online. It is so simple, so unadorned. It is just a person in a room. We don’t even have the questioning presence of an interviewer, no matter how simpatico. She isn’t someone to be considered or interrogated. The viewer does not need to decide what he or she thinks about her. She simply is.

The directness of the our visual interaction with iiGethii changes everything. In the privacy of your own room, the video brings you into immediate contact with this stranger whose experience may yet be very foreign (or very familiar). You get a glimpse of that experience, through the progression of basic selfies. You see the physical transition, yes. But you also see an emotional transition that is both more subtle and more significant. By the end of the video, iiGethii is happy.

Whatever else you may think you know or believe, seeing another person happy hits you. It is powerful, and irresistible: who would actually want to deny someone this happiness?

For all our emphasis on changing laws and language, when it comes to discrimination, there is no greater agent for change than this: truly looking another human being in the face.