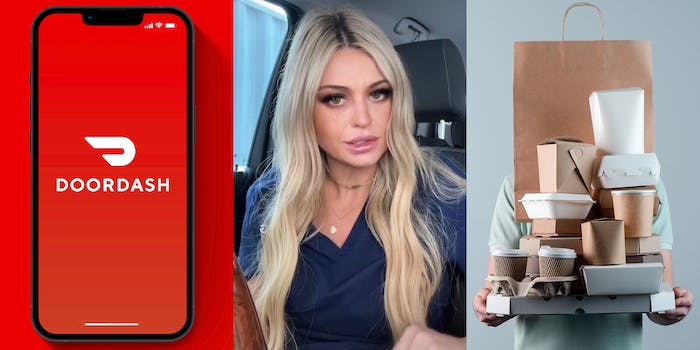 ‘The audacity of this girl’: Worker says co-worker assumed she was paying for $10 drink, sparking debate on DoorDash in the workplace etiquette

'Apparently, she thought that meant I was paying for it.'

What’s the proper etiquette when getting food DoorDashed while at work? A popular TikToker sought to find out.

In a viral video posted on June 24, TikToker Courtney Rose (@courtneyroseofficial), who has 150,000 viewers, lays out a scenario.

“If your co-worker said to you ‘Hey, I’m going to DoorDash from this restaurant. Do you want to add anything?’ Would you automatically assume they were paying for it?” she questions.

The video has 1.3 million views. In the comments section, viewers came to an agreement.

“No I would feel weird to assume someone was buying my food,” one user said.

“No!! Not at all. My friends and co workers do it all the time to lessen the bill then Venmo the person who paid,” another commented.

“Absolutely not,” a third said. “I would also probably pay for the entire thing just in case so they for sure didn’t think I assumed it was free.”

In a second video, Courtney reveals the “friend” she referred to in her first video was actually herself and that it was not a hypothetical scenario.

Last week, she says she had the option to DoorDash a drink in order to get free delivery. Courtney says she asked her co-worker, knowing she frequents the restaurant she was ordering from, if she wanted to add anything to the order.

“Apparently, she thought that meant I was paying for it,” she says. “Keep in mind, I always DoorDash with my work bestie. We always give each other money. It’s not a big deal.”

She says her co-worker proceeded to order a $10 drink but never offered to pay.

“The audacity of this girl,” Courtney says. “I asked TikTok [that question] because I thought maybe I’m being petty because I would never.”

Users continued to share their opinions in the comments section in light of the new information.

“For $10 I’m not asking for my money back but I’m also not ever offering to add something again,” one user commented.

“I certainly wouldn’t order a $10 drink if I thought a coworker was paying!” another said.

“The fact you said to her ‘you’d get free delivery; should’ve been enough for her to know she was paying & then to buy a $10 drink is [insane],” a third commented.