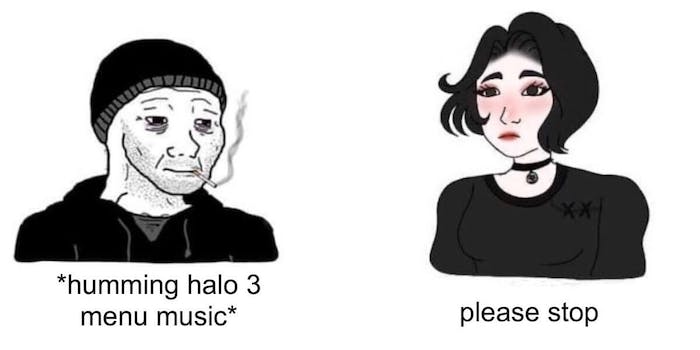 Meet ‘Doomer Girl,’ the new voice of a classic meme

A long-slumbering, influential meme template is suddenly thriving—and it has a new frontwoman.

The introduction of a new female Wojak, or Feels Guy, derivative has reinvigorated a format that dominated the meme marketplace in the early 2010s: rage comics. The artist is currently unknown but depictions of a character known as “Doomer Girl” began showing up online on Jan. 2 and have spiked considerably since.

someone is going to dress up as this girl and get 14k likes 3.8k retweets before someone else exposes her for saying the n word in 2017 pic.twitter.com/VoEotUNzDV

The rage comic is intrinsically linked to the internet of a bygone era. While no longer a dominant force, their saturation within internet culture in the early 2010s was on par with “Advice Animals,” the umbrella term for image macro memes where captions were written in Impact font.

With their earliest origins being able to be traced back to 4chan’s /b/ board in 2008, rage comics are traditionally four-panel stories about circumstances that lead to anger or rage. As most memes did back then, rage comics made their way from 4chan to Reddit in January 2009, with the launch of the “FFFFFFFUUUUUUUUUUUU” subreddit (referred to as “f7u12”). From here, a whole cast of characters such as Trollface, Forever Alone Guy, and “Me Gusta” Face was added to rage comics, cementing their places as hallmarks of internet memes.

In 2013, the Daily Dot published an account of the slow decline of the rage comic. The rage comics subreddit still boasts over 800,000 subscribers with the board’s pinned post stating that “rage comics will never die.” Apparently, that’s correct.

The appearance of “Doomer Girl” has caused a resurgence in a type of meme format that can inarguably be recognized as some variation and a direct descendant of rage comics.

Most memes in this format involve the male Doomer Wojak attempting to interact with the Doomer Girl but failing to do so because of his own shortcomings. Typically, this will involve the Doomer condescendingly asking the Girl Doomer if she’s heard of a band only to have the situation blow up in his face.

While the characters are different and there is self-aware meta-humor in these memes, it is explicitly clear that a whole new generation of meme creators is basically just making rage comics again. Maybe this is how it was always meant to be, maybe we were always coming back here.

Would a rage comic by any other name elicit from me the same half-hearted chuckle? Who knows, but they’re back all the same.