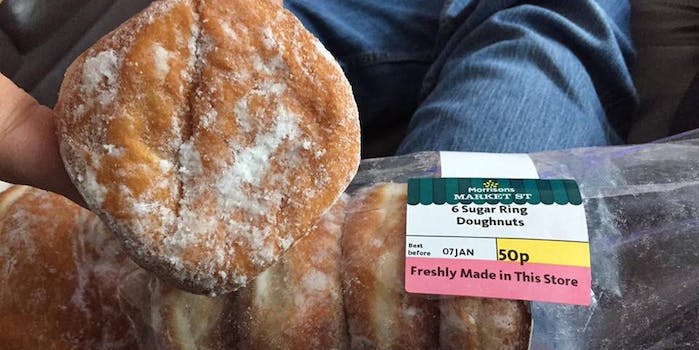 Man asks grocery store for assistance on how to use his donut as a sex toy, gets quality advice

A cheeky customer service representative at Morrison's played along with a man trying to troll him.

A man and his donut are going viral today after he tweeted a British supermarket chain about the product’s defects.

Because what he complained about was the donut’s missing hole, and how that prevented him from using said pastry in an oral sex act with his girlfriend.

Most brands get thousands of these trolling attempts each day and they are often ignored, since it’s clear what Twitter users are after.

But this time, Morrison’s social media person responded. In a way you might not expect.

MacGuyver it, says the grocery store, which, unless that donut is super stale, shouldn’t be that hard.

Our Twitter friend took it another way. As opposed to tearing a hole in the donut, he (supposedly) grabbed another object.

(In the U.K. ‘A&E’ stands for ‘Accident and Emergency’ services.)

You didn't wait for them to cool down? – Cam

The exchange continued very cordially and the two became friends.

She sounds it! My advise, leave everything to chill for 2 minutes. – Cam

If you need anything else, you know where I am – Cam

The Daily Dot reached out to PeeWeeMFC75, who said he really wasn’t going to use the sweet treat for oral pleasure.

“I wasn’t planning on using the donuts for sex. I was bored and flicking through [Facebook] and a friend posted the pic of the donuts without a hole complaining, so I got the idea of [tweeting] Morrisons. Why I said what I did is a mystery. Sometimes I don’t fully think [things] though.”

Regardless, the rest of Twitter ate up the exchange.

And some just unnecessarily roasted PeeWeeMFC75.

“Luckily, my girlfriend has seen the funny side of it.”