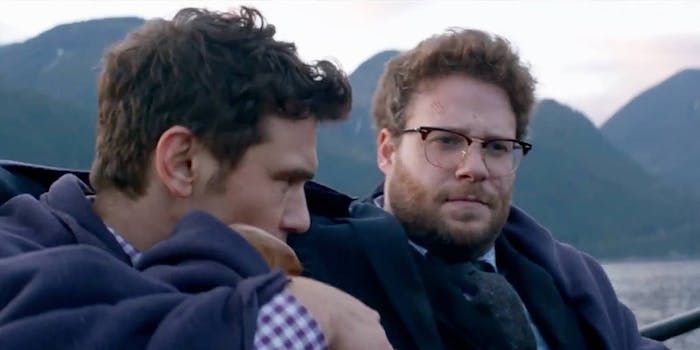 Christmas moviegoers reportedly hated The Interview—and you should, too.

Everyone who thinks it’s their “patriotic duty” to get see The Interview is about to be very disappointed. After Sony reversed its controversial decision to can the film by releasing it in limited release, with sellout crowds greeting the film’s Christmas opening—but most didn’t like what they saw. According to Variety, 50 percent of moviegoers reported that they would not recommend the movie to others, while an embarrassingly high 30 said they would “actively” discourage others from spending their money on it. Most alarmingly, a whopping 70 percent deemed the film to be “culturally insensitive.” And remember: These aren’t the snooty film critics who panned it. These are your Average Joe moviegoers, the same folks who gave Night at the Museum 3 a B+ on Cinemascore.

Remember when Snakes on a Plane looked like a surefire hit on paper—or at least on the Internet, where the blogosphere buzz grew deafening in the weeks leading up to its release? The Interview would be lucky to be Snakes on a Plane, a underwhelming box-office flop that only pulled in $34 million in the U.S. Seth Rogen and James Franco’s bumbling buddy assassination comedy grossed $1 million on opening day, which puts it on track for $3.5 million for the weekend. Forbes’ Scott Mendelson suggests that when the fanboys who rushed out to theaters subside, that “leaves the rest of the weekend for general moviegoers who are merely interested in the film and are willing to choose theaters over VOD.” Considering the word of mouth, it’s prospects then look bleak. Mendelson calls it an impending “box office disaster.”

Before anyone actually saw it, The Interview scored a perfect 10 on IMDb, when 4chan users spammed the film’s page with glowing reviews; however, what looks good on the Internet isn’t so great when you’re forced to watch it in front of an actual screen, and as one of those Christmas day viewers, I can report: The Interview is, to use a phrase, pretty fucking terrible. It’s a bad sign when your movie’s most surreally funny scene is its first—in which an adorable North Korean girl sings about the destruction of the U.S. while a rocket is launched behind her. It’s one of the few moments in the movie that even bothers to be satirical or match the headlines that North Korea generates on its own every day.

While totalitarian dictators might seem like the lowest of hanging fruit, a country like North Korea presents a huge problem for comedians when its already more absurd than anything you could come up with. Satirizing North Korea takes a sharper political edge and comedic point of view than Rogen or Franco have in their arsenal; leaving aside its glaring racism problems, Team America: World Police was an intermittently astute satire of American foreign policy, while 30 Rock made Kim Jong-il into a desperate famewhore who bills himself as the “world’s greatest golfer and movie director and best man at Tom Brady’s wedding.” In “Everything Sunny All the Time Always,” the episode’s best sketch casts Kim Jong-il in a Lethal Weapon type movie with Tracy Jordan as his Murtaugh. The dictator constantly refers to Jordan as “black partner.”

If both of these use North Korea as vehicle to satire militaristic ego—but in different ways—The Interview appears to be about little more than flattering its co-stars’ own egos. Lacking a distinct political viewpoint, the film falls back on a lot on rehashing a lot of the same ideas that characterized their better movies. The Interview has the bromantics of Neighbors, the semi-improvisational comic riffing (and celebrity cameos) of This Is the End, and Pineapple Express’ tonal blend of stoner comedy and action. The film even recycles an inspired choice from Spring Breakers, which you should definitely see instead of this movie, in which ski-mask clad bikini babes dance to Britney Spears’ “Everytime” while twirling machine guns. In The Interview, Katy Perry’s “Firework” stands in for the soundtrack of destruction instead.

However, The Interview doesn’t just feel derivative of better films—it feels like it’s reheating the leftovers of other bad movies, too. The Interview is the second movie this year to use Katy Perry to underscore gay panic; in Horrible Bosses 2, Jason Sudeikis’ ringtone is “Roar,” because it’s hilarious that a grown, heterosexual male would have Katy Perry on his phone. (I think he just has bad taste. Maybe Robyn instead?) In the case of The Interview, we find out that Kim Jong-un is scared because his father told him that his interest in margaritas and Katy Perry’s music (namely “Firework”) makes him gay. Later, his music taste will be used to dethrone and emasculate him, because in Hollywood, there’s no bigger crime than liking Katy Perry.

In a recent blog post for Gawker, Rich Juzwiak called out an unfortunate gay joke in Chris Rock‘s Top Five, where it’s revealed that Rosario Dawson’s boyfriend is cheating with another man. In flashbacks, she reveals that there had been signs, as he’d often requested a finger in his butt during sex; to punish him after a fight, Dawson’s character puts hot sauce on her finger beforehand. It’s a pointless aside that takes away from an otherwise excellent film, but The Interview stays in its rectum the whole movie. There is no other movie. The film has more jokes about its characters’ anal cavities than it actually does about North Korea. That’s fine if you’re into tired gay jokes and scatological humor, but halfway through the movie, you’re bound to ask yourself: Did this shit really almost got us nuked?

Heterosexual anxiety has better been explored in the bromance genre’s other movies (see: the I Love You, Man or The 40 Year-Old Virgin), and in The Interview, it just feels like they’re running out of ideas. If you noticed I haven’t mentioned the plot yet, it’s because they didn’t think up much of one: bumbling idiots are approached by CIA to take out dictator; go to North Korea, one falls for a propaganda officer; the other develops a bond with Kim Jong-un before he remembers that, oh right, he’s a psychopath; they kill him. The plot feels like it could have been written on a cocktail napkin, and the script isn’t much better. During the whole movie, I laughed twice—both within the same two-minute stretch.

Without much of a script behind them (credited to first-time screenwriter Dan Sterling), James Franco is forced to turn his mugging up to 11, playing an irritating Ryan Seacrest meets Perez Hilton style talk show host who dresses like an extra in The Situation Goes to Washington. Veep‘s Randall Park acquits himself of his mess by wisely underplaying Kim Jong-un, which shouldn’t have been difficult, considering how underwritten the role is. There’s a great moment during the film’s titular interview, when Dave Skylark is tasked interrogating Kim Jong-un for his program, and Kim reminds Skylark how little he knows about foreign policy—or North Korea. You could say the same about the movie, such a generic critique that you wonder whether anyone behind it did their homework at all.

As many (including myself) feared, The Interview is nothing but a cynical studio product that exploits an international crisis to sell tickets—which makes it not just extraordinarily lazy but offensive to everyone who championed the film as a rallying cry for freedom. America wasn’t trolling North Korea by seeing The Interview; James Franco and Seth Rogen successfully conned everyone into seeing a piece of garbage no one at the studio even liked—which, for a movie about the totalitarian hive mind, is supremely ironic. If North Korea allegedly leaked The Interview because they were worried it would make their country look bad, they shouldn’t have bothered—it’s Hollywood that looks terrible. if I were Kim Jong-un, I would pull a U2 and send it to every home in America.

The terrorists won this round after all, but not for any reason the film’s supporters expected.