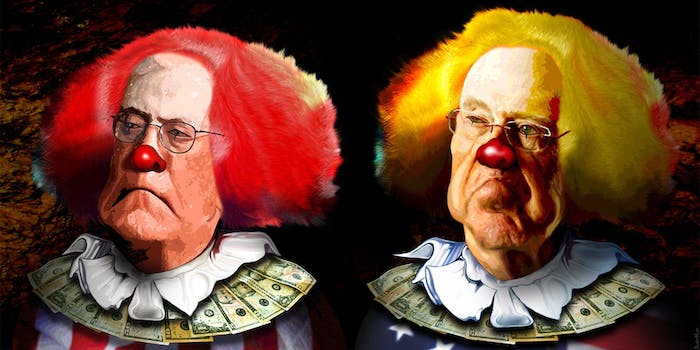 Exxon's CEO isn't spouting off against gays in The Huffington Post so we're only vaguely bothered by him.

While Mozilla’s gay marriage-hatin’ former CEO Brendan Eich was containing the damage of his Prop. 8 donation, I went to Whole Foods.

It was cheap day at the salad bar ($5.99/lb, compared to $7.99/lb), so I heaped a conservative amount of wilted arugula, crusty mac and cheese, and tasteless mashed potatoes into a box and went without a drink—I was left wanting and cotton-mouthed and it still cost me nine bucks. It made me think how “Whole Paycheck” was raking in the dough, while its libertarian CEO, John Mackey, rails against universal health care (he now regrets calling Obamacare “fascism” but still doesn’t dig it).

Is Mackey, a guy who thinks regulations to combat global warming are overkill (lucky for him he lives in Austin, Texas, and not Queens or the Lower Ninth Ward), worse than Eich and his $1,000 donation against marriage equality? Quite possibly, but it’s easier for us to heap scorn on someone like Eich and forget about the more covert ideals of Mackey or his contemporaries like John Schnatter of Papa John’s Pizza or the Koch Industries’ brothers of doom, David and Charles.

When Dan Cathy, Chick-fil-A’s tone-deaf CEO, made it known that he thinks his gay customers aren’t worthy of equal rights, our inner activists were locked and loaded like it was the Battle of Fort Sumter. When it comes to moral outrage with us, corporate words speak louder than actions.

Take for example, the muted response to Google, with a rating of a 100 on the HRC Corporate Equality Index, throwing money last year at Oklahoma GOP senator Jim Inhofe, a guy who still believes there’s a “homosexual agenda.”  Even if political giving isn’t explicitly antigay — Google said the donation involved a shared interest in an Oklahoma data center—it can still hurt us and other disenfranchised people.

Do we just accept that corporations are going to give to the GOP, a party that hates government intervention when it comes to voting rights and Wall Street reform, but loves it when it involves women’s bodies, immigrant opportunities, or our ability to marry the person of our choice?

Republicans, who have generally tried to stymie any and all of our advances since Stonewall, may now be poised for even more power, thanks to our conservative-leaning Supreme Court. Justice Anthony Kennedy was pivotal when it came to striking down Prop. 8 and DOMA, but he just sided with a terror like Antonin Scalia in McCutcheon v. FEC, which now shreds the limits on what rich people can donate during election cycles.

Now, people like Charlie Koch can spread his money to hundreds of candidates and tip the scales so Republicans win control of the Senate.

Still want to wipe your butt with Quilted Northern? The Koch bros, which have given hundreds of millions to right-wing causes, own the company that produces that T.P., which also makes Angel Soft toilet tissue and Brawny paper towels. (Notice they de-bearded the mascot awhile ago? (Coincidence, I think not.) David Koch may say he supports marriage equality but every political check he’s written says the exact opposite.

While we look for new browsers, many of us still order that repulsive Papa John’s pizza, which is run by Schnatter, a guy who threatened (though he insists the comment was “out of context”) to cut his full-time employees to 30 hours a week just so he wouldn’t have to pay for their health insurance.

I wonder how someone so deeply uninterested in the concerns of the little guy, i.e. the majority of his employees, thinks about LGBT folks. He donated oodles of money to Mitt Romney two years ago, so do the math.

Now, thanks to the McCutcheon ruling, he can find fun new ways to give money to GOP Senate candidates like Jim Oberweis, an antigay, anti-immigrant zealot trying to unseat Dick Durbin in Illinois (nice guy Oberweis tried to get Illinois’s GOP chairman fired because he dared to voice support for marriage equality last year) or Tom Cotton in Arkansas, “a pro-life, pro-gun, anti-gay marriage, anti–women in combat, anti-comprehensive immigration reform, and a devout budget hawk,” according to The Daily Beast.

It’s certainly hard to keep up with all the rich assholes who hate us, especially since most are smart enough, save for Cathy, to shut up about their animosity (we’re talking about CEOs here, not the The Bachelor).

But it’s all about perspective. If you switch to Google Chrome but still pump gas at ExxonMobil, you’re giving your attention to a $1,000 donation for a now-defunct ballot initiative while funding a doubly egregious mega-corporation that pillages the Earth and refuses to protect its LGBT employees from firing. Exxon’s CEO isn’t spouting off against gays in The Huffington Post or making public donations to Concerned Women for America, so we’re only vaguely bothered by him.

Somewhere in a giant lair embedded in the side of a mountain, the Koch brothers are petting hairless kitties and smiling.

This article was originally featured on The Advocate and republished with permission. Neal Broverman is a columnist for The Advocate and the editor in chief of Out Traveler. Follow him on Twitter @nbroverman.