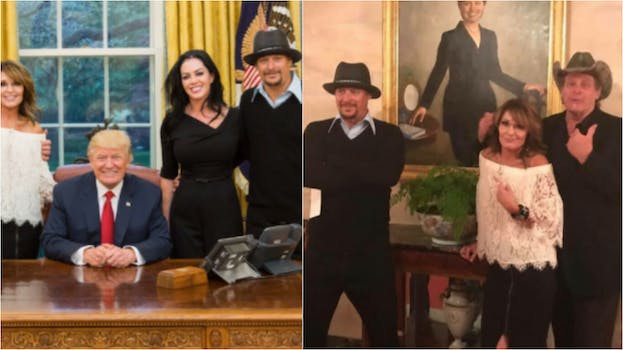 Say what you want about Democrats’ fetishization of Hollywood and Obama’s love of celebrities, they never did this.

Let’s just start with a hypothetical. Say, as the banks collapsed in 2008 under the watch of George Bush, Bono went on stage, and after a particularly rousing rendition of “Elevation,” screamed into the microphone that Bush could suck his machine gun.

And then later said he should be hung.

Then imagine the Secret Service investigated Bono for his claims. They obviously deemed his words rose to the level of needing to speak personally with the singer.

Then imagine if four months after the election, Obama invited Bono to the White House. And then Bono, who had also called Condoleeza Rice a “bitch” and also said she should be hung, took a mocking picture next to her portrait.

You think that would go over well?

Well, our current president did exactly that.

Ted Nugent is Bono in the above scenario, saying disparaging words about the previous administration and being investigated by the Secret Service for threatening to assassinate Obama.

At the White House, he, Kid Rock, and Palin took a picture next to Hillary’s portrait.