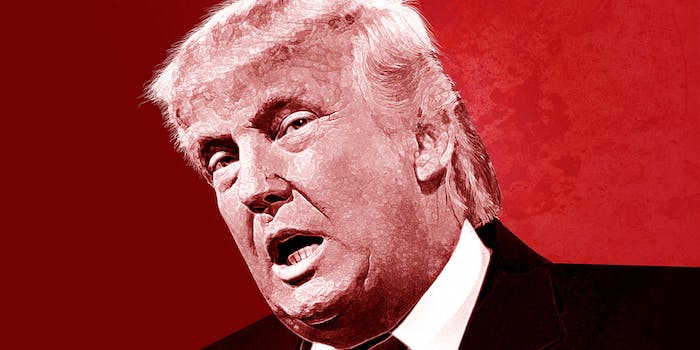 Although Donald Trump was always destined to dominate the first Republican presidential debate, there was one moment from the night in particular, involving Fox News’ Megyn Kelly, which may go on to define his candidacy.

“You’ve called women you don’t like fat pigs, dogs, slobs, and disgusting animals,” said Kelly, before Trump interrupted her, joking that the only woman he’d ever said anything bad about was Rosie O’Donnell (which is false). “Does that sound to you like the temperament of a man we should elect as president, and how will you answer the charge from Hillary Clinton, who is likely to be the Democratic nominee, that you are part of the War on Women?” Eliciting a round of applause for his response, Trump said, “I think the big problem this country has is being politically correct … I’ve been challenged by so many people, and I don’t frankly have time for total political correctness. And to be honest with you, this country doesn’t have time either.”

While Trump is prone to incoherent nonsense, this statement provided legitimate insight into his larger ethos. In a time when we are increasingly concerned with political correctness, Trump is the embodiment of anti-PC culture—the same culture that has run rampant on the darkest corners of the Internet. Therein lies his primary appeal.

Many Trump supporters claim to like him because he speaks his mind. “He’s an asshole, but at least he’s honest, and isn’t really into bullshitting people,” said one Reddit user And honesty, in Trump’s case, occasionally means occasionally ruffling the feathers of a culture which is learning how to be more accepting and respectful. For conservatives who would do everything they can to fight this cultural shift, Trump’s combative nature comes off as refreshing and liberating. “We’re all deeply in debt to Donald Trump,” writes Barry Farber at conservative website WorldNetDaily. “Trump’s blow is the most severe blow to political correctness in the whole of that toxic, malignant, civilization-rotting doctrine’s tyranny.”

Trump is the embodiment of anti-PC culture—the same culture that has run rampant on the darkest corners of the Internet.

But Trump’s appeal goes beyond anti-PC conservatives, also connecting with Internet agitators. In fact, the Daily Dot’s own Ben Branstetter posited that Trump may be “the best Internet troll of all time.”  If Trump is a troll, he’s a very specific one. Like many trolls, his aim is chaos—but it’s self-righteous chaos. “I like [Trump] because he exposes the giant fucking joke that politics is, and everyone hates him for that,” said another one of the site’s users. “The primaries are finally interesting for once because guys like Trump and Paul have views that aren’t 100 percent in line with the 3×5 card of acceptable opinion that the rest of them read their lines from.”

That spirit of rebellion, of bucking political correctness and “acceptable opinions” cuts to the core of Reddit. Like Reddit, Trump believes that having the right to say what you want, whenever you want to, means you should exercise that right, no matter who gets harmed in the process.

When Interim CEO Ellen Pao took over the reins of the site in 2014, the site’s users waged a sustained harassment campaign against her, seeing her track record of combating sexism in Silicon Valley as a sign that she would curtail free speech on the site. Although Pao reportedly fought community guidelines that would put restrictions on user activity, Redditors blamed her for the changes made on the site, calling her a “Nazi c**t.” After a slew of what Pao called “sickening” attacks—including a thread entitled “Ellen Pao killed my dog and raped my wife”—Pao stepped down from the site in July.

Although Bernie Sanders, another anti-establishment candidate, is dominating  political conversation on the site right now, it’s Trump—with his “screw you” attitude and willingness to burn everything around him to the ground—that’s most in line with Reddit’s obsession with unfettered free speech. Both seem to see political correctness as a personal affront to their belief system.

There’s another way to think about what’s otherwise known as political correctness. As the Atlantic’s Megan Garber writes, “we might also think of ‘p.c. culture’ as ‘empathy culture,’” a way of showing respect and consideration for others through language and action. Trump, however, has little time to worry about empathy, because a few hurt feelings are ultimately just the cost of doing business. “This country is in big trouble,” according to Trump, and fixing it leaves him absolutely no time to think before he opens his mouth.

If Trump is a troll, he’s a very specific one. Like many trolls, his aim is chaos—but it’s self-righteous chaos.

For rich and powerful men like Trump, empathy seems to be especially difficult. Garber writes that the Internet is “democratizing and liberating and transformative and insert whatever other sweeping nicety you prefer here. But it is also a matter of predictable anxiety. For one thing, this particular technological shift, like so many that have come before, threatens the people who used to hold positions of authority.”

Trump then, as a man of authority, would rather offend people than adjust his worldview to suit a changing culture. It’s a smart tactic, because in doing so, he’s also able to draw support from others who refuse to adjust their worldview.

Remember though, this worldview of Trump’s is more than just bombastic language, it also has real life implications. As Kelly referenced during the debate, nowhere is that more evident than in his attitude towards women. Not only has he unapologetically trashed Rosie O’Donnell, he’s also gone after Angelina Jolie, Anne Hathaway, Kristen Stewart, Gloria Allred, Arianna Huffington, New York Times columnist Gail Collins, and many more. His history of sexism is stunning, but it’s also a reflection of what’s become the new normal on the Internet.

Take Gamergate, for instance. The movement’s defenders used political correctness as a scapegoat; their narrative was that women like game developers Brianna Wu and Zoe Quinn, feminist media critic Anita Sarkeesian, and actress Felicia Day weren’t interested in critiquing videogames—they were just your typical social justice warriors, looking to draw attention to take away your fun. That argument was used to subject them to a vicious and organized campaign of online harassment—including death and rape threats, hacking, and doxing—even while Gamergate supporters argued they were doing so in the name of ethics.

Trump (no stranger to doxing himself) has also long used harassment and trolling as a way to silence his female opponents. And given that he said listening to Carly Fiorina will give you a headache and implied that Megyn Kelly was on her period during the debate, he doesn’t seem to plan on stopping anytime soon.

It’s a smart tactic, because in doing so, he’s also able to draw support from others who refuse to adjust their worldview.

Bloomberg’s Leonid Bershidsky writes that Trump’s anti-PC image could be viewed as an “unfair advantage, but it’s actually a trade-off.” He writes, “What Trump says about Senator John McCain’s military record or women or immigrants is a turnoff for many voters, which is why his negative ratings are so high.” And indeed, distaste for Donald Trump has never felt so potent. His remarks on Kelly are the latest in a string of comments which have drawn ire from the Republican establishment at large (who are not exactly known for being fans of political correctness themselves).

But on the other hand, Trump has now made peace with Fox News, who threw Kelly under the bus in the process, and he has only continued to dominate in the polls, following last week’s debate. Even if it isn’t likely he’ll be elected president, his campaign has set a dangerous precedent for the state of politics in America.

Political correctness certainly has its limits, but what the Internet and Donald Trump need to understand is that “being PC” simply means treating people with respect. Like a troll without a cause, Trump has made being anti-PC the central platform of his campaign—which, of course, means that he doesn’t really have a central platform at all. When you rally against censorship, but have nothing to say, you end up negating your own argument.

Whether we like it or not, Trump is a force to be reckoned with. He’s the Internet’s anti-PC culture come home to roost, and what hatches from the egg he’s laying may be more frightening than any of us can imagine.