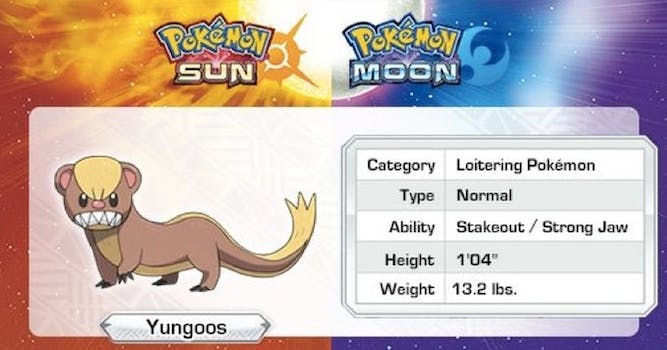 Why does this new Pokémon look exactly like Donald Trump?

Is Yungoos based on Donald J. Trump?

Even though Nintendo should have stopped announcing new Pokémon after the sad, dismal failure that was Popplio, it seems they’re determined to lower the bar even more. As of today, there’s a Pokémon that looks like Republican presidential candidate and wrinkly-smirk emoji Donald Trump.

Meet Yungoos, a loitering-type Pokémon that, like The Donald, is basically a weasel in a hairpiece. Also like Trump, Yungoos has a strong jaw and tiny little hands. Sad!

Want to catch a Yungoos in #PokemonSunMoon? When it's not searching for food, it's probably sleeping. pic.twitter.com/V5xJfSmlJR

Someone in Twitch chat said Yungoos looks like Donald Trump but he LITERALLY DOES. pic.twitter.com/dPuStqv8Yz

I will catch you Yungoos and I will name you Trump @realDonaldTrump #Pokemon pic.twitter.com/nbToOkyYCE

Really hope that Yungoos will be able to learn Trump Card, tho.

We’ll probably never learn what Trump himself thinks of Yungoos, because although he’s happy to offer strong opinions on every subject from immigration to Diet Coke to the RPatz-KStew breakup, he refuses to answer America’s burning questions about Pocket Monsters.

Can we be expected to elect a leader who doesn’t have the guts to openly declare that America can catch ’em all?

Only 146 more days left in this nightmarish horse race.