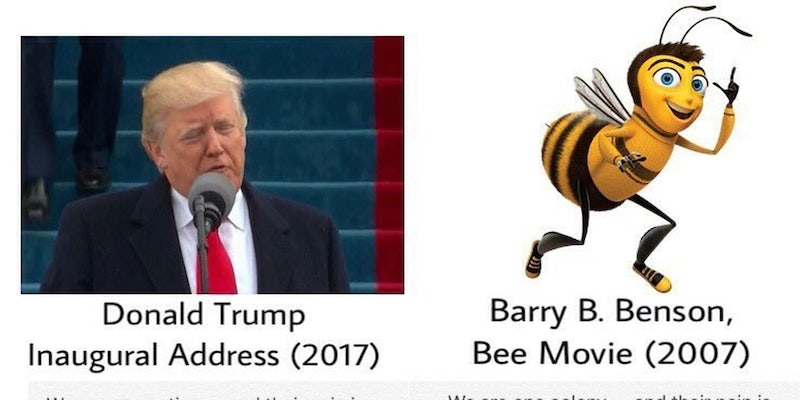 'Aarg! Help! Run! A big, stupid, ugly ogre!' did not in fact come from the mouth of Trump. But it could have.

What do the films Bee Movie, Ratatouille, and Avatar all have in common?

Why, President Donald Trump seems to have plagiarized all three of them in parts of his inaugural speech, of course.

Following the uncanny resemblance of a phrase in Trump’s speech from last Friday to a line in a speech made by Bane, the villain from The Dark Knight Rises, Twitter users found themselves asking if Trump actually lifted a line of his speech from Bee Movie.

While the Bane line was probably, probably, a coincidence, and the supposed second plagiarized line doesn’t even exist in Bee Movie, it wouldn’t be difficult to surmise that other parts of Trump’s speech may not have come from the desks of his advisers Steve Bannon and Stephen Miller.

The cake, for example–if President Trump could order an inedible replica of President Obama’s 2013 inauguration cake, what else could he have copied for the big day?

Take this side-by-side comparison of Trump’s speech and a line attributed to the character Chef Gusteau from Disney‘s Ratatouille—scandal! Well, it would be if it weren’t that Trump said nothing of the sort; while Gusteau does recite the line in the film’s script, the line is missing from Trump’s speech transcript.

But what about the line from the alarmingly aggressive colonel from Avatar?

Yep, Trump said it—not Avatar‘s Miles Quaritch. But this is just the beginning.

No, Trump didn’t lift a line from Quavo (whose real name is Quavious Marshall).

Nor did Trump riddle any of this profanity-laced video sampled by Chief Keef.

Nor this line directly from Shrek (though given the context, it would be humorous to think the words came from the 45th president).

Yes, none of these speech slips happened. But it doesn’t make it any less amusing to propose they did.