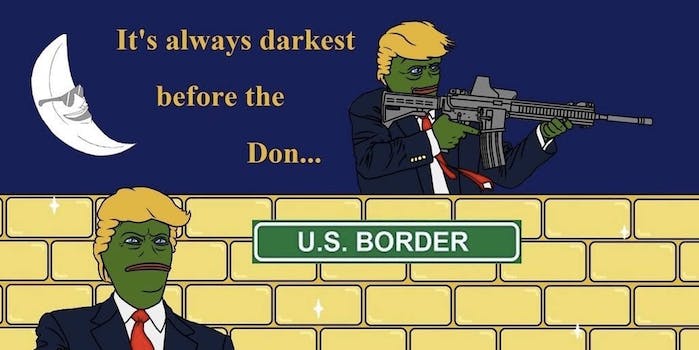 In Pennsylvania, a state that will almost certainly go to Hillary Clinton in the upcoming presidential election, a group of Trump supporters is still fighting the good fight… by putting up billboards of meme character and alleged hate symbol Pepe the Frog.

Pepe began life as a harmless webcomic character, mutated into an all-purpose internet everyman, and then got co-opted by the alt-right as the unofficial mascot of trolls for Trump.  He’s been used to troll Jewish people so often that he’s now on the Anti-Defamation League’s list of hate symbols. Hillary Clinton’s campaign even released an official Pepe explainer.

It’s all very unfortunate, and some say Pepe is just misunderstood. But the firestorm around the frog only seems to have increased the alt-right’s efforts to use him as a symbol.

Hence: billboards of Pepe as Trump, which Vocativ reports could hit Pennsylvania roadsides starting next week.

The project was crowdfunded on WeSearchr, whose CEO is controversial conservative blogger Chuck Johnson. Johnson is best known for three things: outing the woman behind Rolling Stone‘s retracted story about campus rape at the University of Virginia, being permanently banned from Twitter, and allegedly pooping on a floor in college. (Johnson has sued Gawker Media for reporting the floor-pooping rumor.)

The fundraiser, started by WeSearchr staff and based on a tweet from “AltRightMemes,” has come up with $5,000 so far. The design they’re pushing, featuring two gun-toting Trump-Pepes at the fictional Border Wall, looks like this:

That other character, in the corner, is former McDonald’s mascot Mac Tonight, who took on a second life as a racist meme called Moon Man in the 2000s. “Moon Man is usually accompanied by text-to-speech voice synthesis which speaks of racism and violence against minorities,” Know Your Meme explains.

Pepe has some plausible deniability as a racist hate symbol. The character also known as “Notorious K.K.K.” (don’t click that link unless you’re ready for auto-playing racial slurs) has a little less.

“We think a lot people are going to be upset about the billboard,” Johnson told Vocativ.

That’s a hint about its purpose, which appears to be pure trolling. The crowdfunding pitch supports this hypothesis:

As of today, that [AltRightMemes] tweet has over 2000 retweets. Now that’s a sign from Kek. Let’s make sure we don’t disappoint him.

What kind of reaction will this innocuous billboard about the leading American presidential candidate get from the media?”

(“Kek” has supplanted “lul” over the past couple of years as the trollish term for the glee that comes from getting a rise out of one’s targets.)

And as for the media saturation plan?

“If local news and the SPLC don’t cover it immediately, we’ll make sure to get footage and post it for you,” the WeSearchr staff promises.

No doubt, man. No doubt.