Man of the people and President-elect Donald Trump knows how you feel about the holidays. That why he’s suited up to do battle in the War on Christmas and announced that his campaign shop would be selling this seriously MAGAnificent ornament on the day before Thanksgiving. 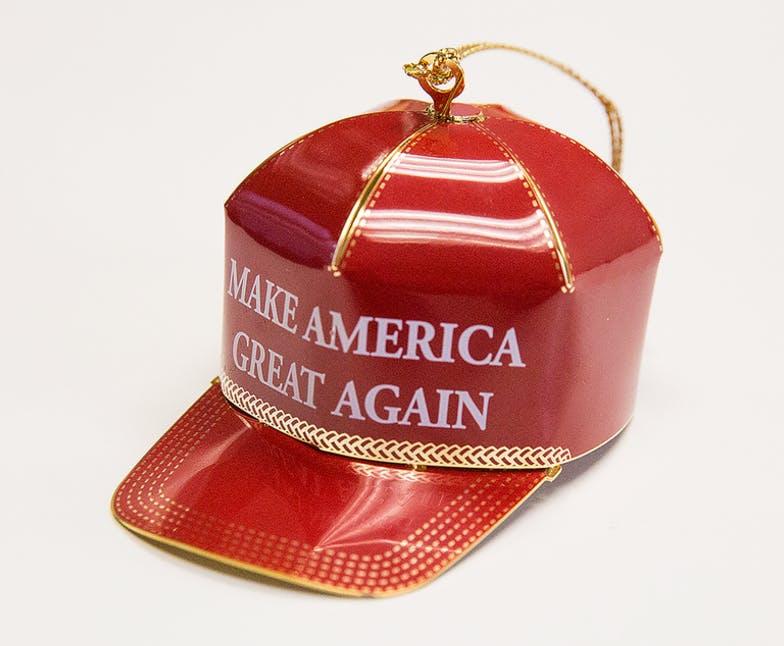 Yep, that’s a $149 MAGA hat ornament. There are no dimensions listed for the gilded hat, which is allegedly made out of 24 karat gold and brass, but let’s just say it’d look better on your PEZ dispenser than your freedom-loving Golden Retriever.

The Trump campaign sent out an email hocking the useless piece of metal that’s sure to bring holiday cheer to your tree and incredible pain to your wallet:

The email goes onto completely ignore the fact that the bauble’s described as “14k” while the shop listing clearly states “24k.” Which K is it, Donald J. Trump?

Oh, and it includes this powerful call to action:

President-elect Trump loves Christmas and makes a point of proudly saying “Merry Christmas” every chance he gets.

Did Jesus carve up a turkey and make sure your drunk uncle only gets the Martinelli’s and not the cheapass Mr. Boston brandy? No, he went HAM on Christmas because it’s his birthday and that’s the one true holiday you should actually be celebrating.

Trump knows the merriness of this day is and he’s not afraid to acknowledge it every chance he gets. Literally every single one. From here on out, expect nothing more in terms of public comment from the incoming commander in chief except “Merry Christmas.” Like hell he’s going to form a substantive transition team or fully staff up the White House before Dec. 26th.